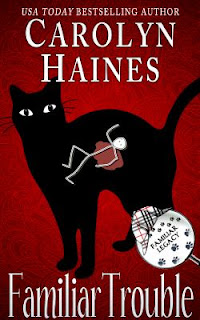 Before Carolyn Haines wrote about Sarah Booth Delaney in the “Bones “ series, she wrote about a cat detective named Familiar.  Some of Familiar’s diehard fans had been calling for his return, but Haines decided to begin a new series featuring a cat named Trouble who is Familiar’s son.  Trouble has not only inherited his father’s investigative abilities, he’s been avidly watching episodes of Sherlock Holmes for tips. He’s also picked up a bit of an accent: he says he now sounds like Benedict Cumberbatch.

Trouble is currently residing the Wetumpka, Alabama, with bookstore owner Tammy.  On a stargazing excursion one chilly December evening, Tammy is attacked and left unconscious.  After she comes to, Trouble guides her to the location of a body.  When the police arrive, Deputy Aiden Waters is shaken to realize that the dead woman’s body has the hallmarks of a serial killer he’s been following for several years,  a person who insinuates himself into the life of a small town and proceeds to murder women.

With an assortment of suspects, it’s up to Trouble and his human companions to solve this mystery before the body count gets any higher.

While Trouble speaks directly to the reader at times, he’s not the main narrator.  Instead most of the story is told in the usual third person narration with occasional interjections from Trouble, often offering bits of background or advice such as “protect your biped.”  He’s a delight and I enjoyed his commentary.  The rest of the book is a straight forward mystery with a bit of romance. Tammy is a fine lead character with a love of books and the usual tendency to do somewhat dangerous things in pursuit of clues.  Aiden is a former FBI agent with a lot of baggage from the past.

Carolyn Haines is no novice to the genre and it shows.  Not only was this a fun book with enough twists and turns to keep me interested, but the characters have a bit of depth, with moments of introspection. I liked Trouble and may well read more in the series, though it appears each subsequent book is by a different author with a different setting and characters. I may also try to track down the earlier books about Familiar which, sadly for me, are available as ebooks but not print.
Posted by BPL Ref at 12:43 PM