Hell’s Princess: The Mystery of Belle Gunness, Butcher of Men by Harold Schechter 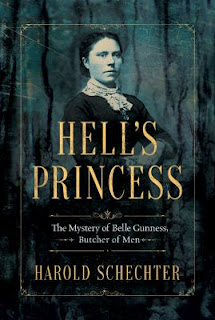 When Belle Gunness’ farm house burned down in 1908 with her and her three children in it, the people of La Porte, Indiana were shocked and horrified. Their horror would only grow when numerous bodies were discovered buried around her farm. The media frenzy that followed (and the uncertainty of whether she faked her own death or not) helped catapult Gunness into the annals of famous serial killer history.

The first half of Hell’s Princess recounts what it can of Gunness’ early life in Norway, as well as her journey to America and her eventual crimes. Schechter also describes the media firestorm that erupted after the discovery of the murders: thousands of folks traveling to La Porte to visit the farm (and steal a “souvenir”), stories covering those who claimed they had just barely escaped her clutches, and later a packed courthouse.

The second half gets into the trial of one of Gunness’ handymen who is accused of setting the fire. I have to admit that I skimmed a lot of this portion. Schechter certainly did his research which I appreciate but at times I felt he was throwing in things just to show all the research he did. There are many, many repeated instances of Gunness sightings that I felt could’ve been trimmed down, and I don’t know that so many pages and detail were needed for the trial.

But overall, I thought this was a very interesting story. I knew a little about Belle Gunness but not a lot so I was excited to read this. I’d recommend it for true crime fans, just know going in that it’s not entirely just about Gunness.
Posted by BPL Ref at 9:02 AM