Dancing Naked at the Edge of Dawn by Kris Radish 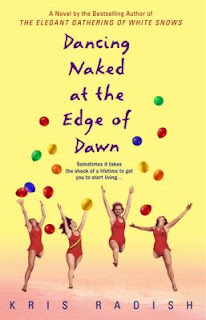 I found the first chapter audacious and unbelievable. At one point I laughed aloud, which prompted the decision to read the book. In my opinion, it did not live up to its early promise.

Finishing this book took two weeks. I often read a book in a day and a longer one over a weekend. That this one took two weeks indicates I struggled to make myself read it.

Meg discovers her husband making love to another woman, at home in Meg’s bed. This chance discovery leads Meg into a voyage of new self-awareness and soul-searching, much of it painful and confused. Ultimately, she reaches a new plane, one might say, and feels hopeful about life again.

It was the painful and confused part that made me unhappy with the book. She and friends wallow in misery far longer than I am willing to tolerate. The confusion sometimes feels almost mentally unbalanced, but perhaps individuals whose lives are disrupted in such a manner sometimes feel deranged.

The book is new to BPL and to our regional library system, but it is not a new publication, having first appeared in 2004. Booklist gave the novel a positive review. I read reader reviews on Amazon and Goodreads. Readers gave mixed reviews; some loved the book, while some detested it. (Amazon places the negative reviews off to the right and not among the glowing ones.) Count me among those who found the work disappointing, at best.