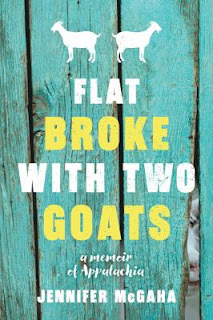 Jennifer McGaha lived happily in middle class suburbia, her life full of kids, pets, PTA meetings, college funds, sports practice, community dinners, schedules that rarely allowed her to cross paths with her husband—and mounting debts.  When Jennifer finds out that she and her husband owe a substantial amount of back taxes, she’s forced to foreclose on her beloved home and move to a rundown cabin in the woods.

Now, she’s must contend with copperheads lurking beneath her grandmother’s old china cabinet, “ringneck season,” dirty orange shag carpets, a temperamental boiler, and a leaky, drafty old house that makes her clothes smell of mildew.  But as Jennifer and her husband readjust to their drastically altered lives, they discover unexpected joy in their ramshackle cabin, their herd of hilarious barnyard characters, and their growing ability to live—and even thrive—off the land.

I picked up Flat Broke with Two Goats after seeing it on Overdrive and, of course, the Bookblog.  I was a little hesitant at first, but I decided to pick up a copy anyway and give it a try.  Overall, I enjoyed reading about Jennifer McGaha’s foray into homesteading.  McGaha is a very talented writer.  Although I struggled through a few parts of her memoir, I found that her writing—her voice, her humor, her ability to draw me into the story—kept me going, even when the going got tough.

Her memoir feels very real, very raw, and her story, especially when she looks back into her abusive first marriage, can be a bit painful.  McGaha is very honest, even to the detriment of her own character—though there were a few instances that her panic made the narrative feel “shrill”—but it gives her writing a powerful punch.  I also liked reading the recipes between chapters.  They helped to enhance and enrich McGaha’s story, offering insight into how her cooking changed as she transitioned into her new life.

Additionally, I liked hearing about her grandmother, about the relationship she cultivated with her.  Having lost my grandmother just over two years ago now, I understood intimately how crushing it can be to lose someone so important and how it completely changes the dynamic of a person’s entire life.  Those stories felt particularly powerful for me.

While I did enjoy Flat Broke with Two Goats for the most part, I was constantly frustrated by the McGahas’ ability ignore the warning signs of their own impending financial collapse.  Although the author admits to having her head buried in the sand, I just couldn’t understand how she could willfully ignore the loss of utilities, the strain of extra mortgages, or the repossession of her car—or, you know, the fact that her husband was obviously struggling.  I understand he purposefully kept it from her (and I can understand why, considering she does not does cope well under stress), but she never asked questions, she never tried to dig deeper.

Even after it finally happens, even after their middle class world collapses, they’re still careless with money.  They decide to continue putting their youngest through an expensive private school, rather than letting him go to public school; they are willing to spend $200 plus on a specific breed of goat, rather than adopting one cheaply; they feed their chickens organic yogurt, rather than looking at cheaper food options.  (Does she not even realize how much more expensive “organic” products cost in the store?)

Throughout the memoir, I was painfully aware of a serious disconnect when it came to money.  McGaha worked as an adjunct professor and her husband had—and continued to have—a lucrative career as an accountant.  They had ample opportunity to live within their means, they just didn’t.  They weren’t living in poverty, especially since they obviously had internet access and used cell phones and paid their vet bills; they were just feeling the pinch of living on a much tighter budget, a budget that’s probably more akin to a median income household rather than the upper middle-class from which they came.

Note: Kristin also reviewed this book.  For her take on McGaha's book, click here.
Posted by BPL Ref at 9:24 AM