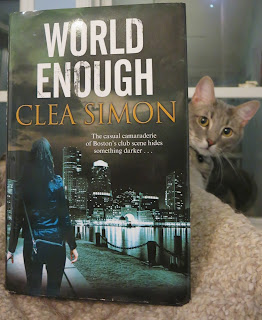 Tara Winton is divorced, working in communications for a large corporation, and really just marking time.  Her job doesn’t excite her; she could do most of her tasks in her sleep.  Her days are pretty much routine.  It wasn’t always like this.  Back in the day, she was a music reporter for an independent ‘zine, covering the burgeoning Boston music scene.  Those were heady days, watching the musicians that made it, the ones that didn’t, and the ones who flamed out too soon. It was more than that, though: it was a community.  Relationships were forged then that had repercussions from then until now.  But that seems like another world, another lifetime.

She still hits some of the clubs with long-time friends, listens to the music.  Some of the bands are still around, the ones that were good but not good enough; the ones who had a sound, but whose members, like Tara, work other jobs to pay the rent and only get together to play because they love it.  Then Tara hears that Frank, one of the old gang, has died from a fall. It seems a sad and unlikely ending.

The news prompts Scott, Tara’s old editor from the ‘zine days, to give her a call.  He’s now the editor of City, a glossy publication full of puff pieces, but he wants to make it edgier.  Maybe a story about the old music scene, tying it in with Frank’s death, will attract a wider audience.

Tara is reluctant, but soon discovers this is just what she’s missed: real journalism, digging for a story, and maybe enjoying reliving the old days.  Memories come flooding back, along with some nagging questions about what happened to Chris Crack, the star who was on the verge of superstardom before that accidental overdose . . .

Since I’ve never been to Boston and my musical tastes run more to folk, bluegrass, and Americana, I wasn’t sure if I would be able to get into this book which, as the jacket copy emphasizes, is all about the Boston music scene of a particular era.  I need not have worried; Tara is an easy character to relate to, and the whole feeling of the book was nostalgia for the past, when the world was new and exciting, rather than esoteric music knowledge.  Simon does an excellent job of conveying what it was like in those heady times, when it seemed superstardom was on the horizon for some of the bands, and everyone was chasing dreams.  (Actually, it all reminds me of a country song called “Life Happened.”) I particularly enjoyed the way that layers were peeled back, revealing that rosy memories had more than a bit of amnesia to them.  For example, Tara was always too high on music to be part of the drug scene, but she gradually realizes that there was a sudden upswing in the amount of drugs available, cocaine especially—a fact of which her friends were well aware. She also finds that Frank had been asking some questions about those old days before his convenient fall.

World Enough has turned out to be one of my favorite books by Simon.  I liked the deft way the author handled Tara’s gradual re-evaluation of her memories about events and even her friends, questioning her perceptions, and even the way she’s currently living.  It’s a book that will stay with me for some time, bolstered by strong characterization and a near-universal tendency to revisit our past at certain points in our lives. You don’t have to be a rock fan to enjoy this book, but it helps if you’re old enough to have attended (or avoided!) a high school reunion or two. There’s enough grit to qualify it as noir, but it’s never overly graphic.

In short, it’s a most enjoyable book even for those who aren’t mystery readers or rock fan fans but who appreciate good characterization and atmosphere. 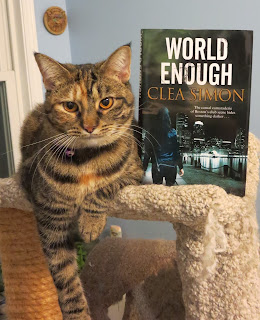 Full disclosure:  I was given an advance copy of the book by the author without any stipulations or conditions.The book is due out in the U.S. on November 1.
Posted by BPL Ref at 8:59 AM