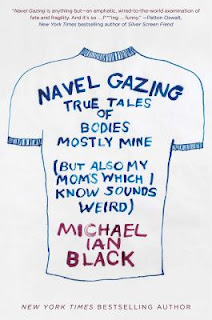 
When I first picked up Navel Gazing, I realized I recognized the author’s name.  He was relatively famous, I knew that; I’d seen him on a screen somewhere, even if I couldn’t remember exactly where.  However, I’d never recognized him as a writer.  It surprised me, and I couldn’t help wondering if this wasn’t just another memoir by a celebrity with a ghost writer.

Except Michael Ian Black isn’t just another celebrity writing a book about his career; rather, he’s a man writing about the trials of everyday life with a terminally ill parent.

He discusses his family and his life as he grapples with his mother’s deteriorating health; he discusses his health and what he’s not doing to improve it; he discusses his beliefs, his religion and how it impacts him as his mother struggles with one medical diagnosis after another.  It’s a candid account on life in general and full of humorous musings on health, happiness, and faith.

I loved reading Black’s memoir for the simple fact that I could relate to him.  When he talks about his health and his worries regarding growing older, yet he doesn’t want to schedule another appointment with the doctor, I understood his fear of disease and his subsequent reluctance to do anything about it.  I mean, it sounds exactly like something I would do; in fact, it sounds like something I’ve done.

Likewise, when Black discussed his floundering attempts to become healthy and, for instance, decided to take up jogging as a healthier alternative to binge watching Netflix, I understood and connected with his experiences.  I understood his struggles with weight and physical exercise (it’s exhausting), and I recognized his desperate desire to discover something deeper, more important in his running routine.
“The toughest thing about training for the half marathon was the time commitment:  hours per week, hours that could have been more fruitfully spent not running.  Why did I persist, week after week, through the summer heat and into the chilly days of autumn?  What was my fascination with running?  [...]  What did I want?  The truth is, I knew what I wanted from running, but I couldn’t quite bring myself to admit it:  I wanted enlightenment.  And this is where are all my convoluted feelings about my body and Mom’s declining health and aging and my own fear of death and praytheism congeal into a goopy sludge.  This is the nexus.  It is a stupid nexus, to be sure, but I could not quite shake the idea that running could save me.”

I laughed at his self-deprecating humor, of course, but I enjoyed his candor and I connected on a personal level with his experiences.  I know what it’s like to struggle with weight and health concerns (doesn’t everyone?), and I know what it’s like to hope that you can find something—anything—in physical activity.  You hope to find enlightenment, contentment, peace—you know, something you can’t quite name—and it’s always a little disappointing if you don’t.

Overall, I loved the reading Navel Gazing.  It’s fun and humorous, like it’s intended to be, but it’s also insightful and relatable.  It connects on a deeply human level, exploring our individual foibles and disappointments, our worries and fears and insecurities.  Personally, I came away from Navel Gazing with a familiar, ‘intense...almost electrical connection” to another human being.

It’s a feeling that I’m sure any reader will appreciate after finishing Black’s memoir.
Posted by BPL Ref at 9:58 AM