The Jane Austen Project by Kathleen A. Flynn 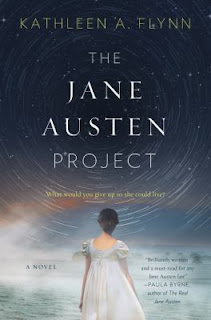 
When Dr. William Ravenswood and his sister Mary arrive in London in 1815, they are all but friendless.  They are newly arrived in England, being the children of wealthy planters who, abhorring the slave trade, freed their workers and sold their plantation. Their charming manners and wealth soon attract interest, and their letter of introduction allows them to meet others of similar station.  They are looking for someone in particular, however;  Henry Austen, a gentleman who has a sister with a secret.  She’s an author.

The Ravenswoods have secrets as well.  They are not brother and sister, those are not their real names, and they have come from a great deal farther than Jamaica.

They are time travelers, sent back to try to obtain by hook or by crook a copy of a never published Jane Austen novel.

Let me say at the start that I can be a bit squeamish about light fiction using actual historical characters.  I tend to second guess a lot, wondering whether or not Ben Franklin or Edgar Allan Poe or Jane Austen would really have behaved in the manner depicted.  The reviews on this book were good, so I decided to chance it.

It is well-written and quite well thought out.  I don’t know if author Kathleen A. Flynn has ever read Connie Willis, but some elements reminded me of her marvelous Oxford Time Travel series:  the travelers’ base institute is in Oxford, for example, and the elaborate contingency plans are made.  There is some description of the rigorous training involved when time traveling back to 1815: learning to ride a horse, getting properly dressed in the garments of the time, and the crucial ability to blend in with the population.

Characterization was well done, and the reader gets a good feel for the time period.  The story is told from the point of view of Dr. Rachel Katzman, aka Mary Ravenswood, a medical doctor who has provided humanitarian aid in various countries under difficult circumstances.  She is adept at hiding her horror at some of the living conditions—handwashing, for example, isn’t nearly as prevalent as in modern times—but occasionally chaffs at the restraints she must endure as a woman in a time when women had limited influence.

I enjoyed The Jane Austen Project.  The author had done her research, and still managed to pull out a few surprises.  The result is a very satisfying novel.
Posted by BPL Ref at 9:29 AM