The Prince and I by Karen Hawkins 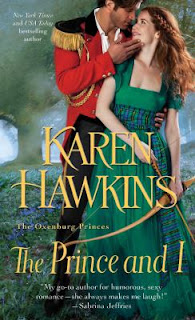 
Murian MacDonald loved Rowallen Castle, and she loved the immeasurably happy life she lived.  But when the earl killed her husband and stole Rowallen from beneath her, Murian vowed revenge.  Now, she waylays the earl’s wealthy guests with a loyal band of misfits, trying to lure him and his guards into pursuit so she may sneak back into the castle and find evidence of his misdeeds.

Her plan is working well, until she stops the coach of Gregori Maksim Romanovin, a prince of Oxenburg, and the Grand Duchess Natasha Nikolaevna.  Although she bests him in a duel and makes off with her prize, Murian hasn’t heard the last of Prince Max—and, whether she likes it or not, she may very well need his help if she hopes to reclaim Rowallen and defeat despicable earl who ruined her life.

I rather liked Karen Hawkin’s novel, The Prince and I.  It’s a curious blending of romance and Robin Hood, and I enjoyed it.  Max is the quintessential hero:  dark, brooding, capable and confident—not to mention, he’s a literal prince.  Murian, on the other hand, is anything but a damsel in distress:  she’s calm, competent, hard-working and surprisingly agile with a blade.  She’s been dealt a terrible hand, having lost her husband and her home, but she’s making the best of her situation and managing to survive.

When a sweet romance develops between them, I couldn’t help gush over the tenderness of their relationship.  Murian is driven by her desire for revenge and, while it does mark her growing affection for Max, it also makes her a more conflicted, complicated character.  Their relationship isn’t cut and dry, rather they’re faced with a number of hurdles to jump, not least of which a conniving earl that will see Murian dead and Max brought to heel.

However, I think my favorite character was Max’s grandmother, the Grand Duchess.  Natasha was, by far, the most comical character and, I think, the most knowledgeable.  She doesn’t care how others perceive her; rather, she likes the idea that others consider her a witch.  (It’s why she most often threatens to turn others into goats and frogs.  She much prefers infamy to anonymity.)  Moreover, she’s often caught in the thick of trouble, one way or another, and yet she still manages to turn circumstances exactly how she wants them.

This last quality makes me think that she’s not the doddering old witch she likes her grandson to think she is.  Natasha is wily, not necessarily senile; in fact, she strikes me as being preternaturally intelligent.  For instance, if she hadn’t lost in a card game to the earl, they never would have traveled to Scotland.  Max would never have met Murian; Max would never have gotten involved in the earl’s business and discovered what the man did.

Natasha is the force that propels the story forward.  She helps shape it the most and, while she may seem laughably naïve or even foolish, I have this feeling that she’s not what she seems.  Throughout the story as I learned more about her, I had this odd suspicion that she knew exactly what she was doing, that she calculated every move to her—and, by proxy, her grandson’s—benefit.

Personally, she’s part of what made The Prince and I so enjoyable.  I may have to read more of the series if it means I can reacquaint myself with the Grand Duchess.
Posted by BPL Ref at 8:46 AM