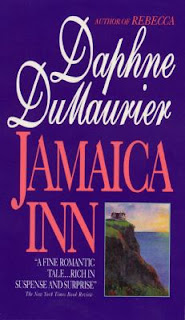 The year is 1820.   Mary Yellan, twenty-three year old woman, has been left an orphan by the recent death of her mother. With few options left, Mary takes a stage to Cornwall to stay with her Aunt Patience at Jamaica Inn, an establishment run by her uncle, Joss Merlyn. When she arrives at the inn, after attempts by passengers to dissuade her, she is accosted by a brute of a man.  She warns him that her uncle will deal harshly with him, then discovers that the brute IS her uncle.  Even more shocking is the change in her aunt:  the once vivacious woman seems a shadow of her former self, cowed by her bullying husband.  It doesn’t take long for Mary to realize there is something very wrong at the Inn—there never seem to be any overnight guests, but there are locked doors and strange sounds in the night. Mary is determined to discover the truth about Jamaica Inn, but the cost may be more than she is willing to pay.

I’d heard of this novel for years, usually mentioned as an after-thought to the better known Rebecca and My Cousin Rachel.  My expectations were upended from the start: while Mary is young, she’s no sheltered child.  After her father’s death, Mary and her mother continued to run the farm, eking out a living.  It was hard, backbreaking work. Mary’s load increases when her mother falls ill, and eventually dies.  The farm, never particularly fertile, has become barren.  Mary has no choice but to seek out her aunt and try to make a life for herself.  Most tellingly, she has no illusions of grand romance.  Raised on a farm and observing human nature, her views are more than a bit cynical. She’s tough, practical, and strong-willed.

Once at Jamaica Inn, Mary’s options are limited, not that women of that era had much in the way of options to begin with.  She’s in the wilds of Cornwall, with the wind and the moors and the sea.  Du Maurier’s descriptions of the countryside are vivid, the isolation and bleakness seep through every page. I can understand why tourists still seek it out to see if the reality matches the literary portrait.

The dark secrets—a gothic staple—are truly dark.  One scene in particular chilled me to the bone, when her uncle reveals his true occupation and what that entails.

Of course, another standard gothic feature is an element of romance.  Much against her will, Mary finds herself attracted to Jem, her uncle's younger brother. However,  Jem's trustworthiness is in doubt.  He says he's nothing like Joss-- but is he telling us the truth? Or is this just a lie to draw Mary in?

The ending was well done, although I’m not sure if I consider it a happy one or not.

Although the book was published in 1936, it feels as if it could have been written this year.  Du Maurier’s work still feels fresh and modern, from the descriptions of the characters to the awareness of social conditions. She upends our expectations of a genre while seeming to follow convention.

It’s a shame that this novel isn’t more widely read today, and I give it my highest recommendation. (Note:  the cover image used in this blog is a reprint edition which makes it look like a sweet little romance novel.  It isn't.)
Posted by BPL Ref at 10:02 AM