Lily Dale: The True Story of the Town That Talks to the Dead by Christine Wicker 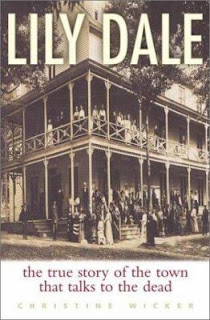 I first encountered Lily Dale in a novel by Wendy Corsi Staub. The plot has young mother Bella and her son ending up in an eccentric hamlet in New York where people all believe in spirits and the afterlife, and you can’t toss a crystal ball without hitting a medium or psychic. Bella is introduced to such local attractions as Inspiration Stump and the Fairy Trail. (You can read the full review here.)

I assumed, wrongly, that Lily Dale was a fictional location.  It does exist, and so does Inspiration Stump.

Lily Dale, New York was incorporated in 1879 as a meeting place for Spiritualists, one of several such places that sprang up during the mid 19th century when there was an intense wave of interest in the idea of spirits and life after death.  Sir Arthur Conan Doyle and Mary Todd Lincoln were two early proponents.  While similar communities faded away or else lost their otherworldly personas, Lily Dale has managed to survive and even thrive, to a certain extent, hosting seasonal events that attract thousands.

Journalist Christine Wicker was also intrigued by Lily Dale and set out to try to understand why this town continues to draw tourists and seekers.  She is a skeptic, but willing to be convinced.  She begins by interviewing residents and visitors alike, asking them about their experiences. She weaves together a number of stories to give the reader a fuller picture of the community, warts and all.  She doesn’t shy away from detailing incidents where mediums have been unmasked as charlatans but she doesn’t denigrate those who believe.  I found the book to be balanced in its presentation, leaving readers to decide for themselves whether or not there is something supernatural going on in Lily Dale.

The book is well written and I admire Wicker’s even-handed approach.  The only aspect of the book that bothered me was the tendency to tell part of one person’s story, then switch to another topic for several chapters before returning to that person.  At a couple of points, I stopped reading sequentially and searched for the point where the person’s story was picked up again. Then I went back and read the parts I had skipped. At the end, I realized she had appended a “cast of characters” of sorts, which would have helped more if placed at the beginning.

The people she interviews are from all walks of life and assorted backgrounds.  There are professors, business people, laborers, and even a psychologist.  Some are year-round residents, but most are summer visitors:  not only are winters cold, but there are strict regulations on who can own property. Most share a personal loss, usually of a person, but sometimes a loss of personal identity—job failures, divorce, or other life altering events—that causes a person to seek out spiritual direction.

Almost more important than the psychic energies (or not, your mileage may vary) is the strong sense of community that seems to permeate the town.  There’s a great deal of tolerance for people and their beliefs and a strong sense of feminine power—many of the early spiritualists and mediums were women. These communities also embraced a number of progressive ideas: many were suffragettes and abolitionists.

Those looking to either validate or debunk Lily Dale may find this book to be disappointing.  Those who are curious and open minded will find food for thought.  Personally, I think I’d like to take a road trip to visit someday.