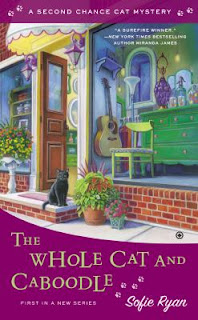 The Whole Cat and Caboodle by Sofie Ryan introduces us to Sarah Grayson, proprietor of Second Chances, and Elvis, a moody black cat.  Second Chances is a sort of “used everything” store, where Sarah sells various collectibles, furniture, clothes, etc.  She also ends up being volunteered to do a furniture painting workshop at a senior citizen’s center courtesy of her honeymooning grandmother. The workshop goes well, but Sarah is concerned that one of her grandmother’s friends fails to show.  She stops by Maddie’s house on the way home to find the elderly woman sitting quietly in her garden beside boyfriend Arthur—who happens to be very dead. And not dead by accident, either.
Although they’d never been introduced, Sarah’s recognizes Arthur as a customer whose behavior had been a bit suspect.  He’d sold her an ornate silver tea set along with a story that just didn’t ring true.  The fact that he’d shown back up and tried desperately to buy the set back just increased Sarah’s unease.  She’d already been wondering if the set had been stolen.  Could that be a motive for murder?
Unfortunately, the police think they have a better one:  a woman scorned and scammed. The departed (but not so dearly) Arthur was a con artist who specialized in seducing women and parting them from their money. Maddie was just his latest victim and, the police believe, the one who took drastic action.  Sarah doesn’t believe that for a moment and is determined to prove Maddie innocent.
As the Magical Cats series (which she writes under the name Sofie Kelly), the Second Chance Cat Mysteries features a cat and a youngish woman with a host of female friends of assorted ages.  One of the strengths of both series is the female friendships.  Ryan has a knack for writing dialog, including quips that don’t seem overly planned but natural kidding around between old friends. They mysteries are serviceable, and there’s a touch of otherworldly:  while Elvis never speaks, he seems to know things and helps guide Sarah to solutions even as he maintains a certain standoffishness.  Ryan also offers some nice little dollops of information about collectibles and refinishing items to make them useful and attractive.
I consider this a “good enough” book, i.e. good enough that I’ll try a second in the series.  I wasn’t wowed, but then I find that true of many first in series books.  Much space is taken up with introducing all the characters, explaining the background, and setting the stage for future books. Given that I’ve enjoyed the other series as it has progressed, I have high hopes that this one will tighten up a bit as well.
Posted by BPL Ref at 8:52 AM