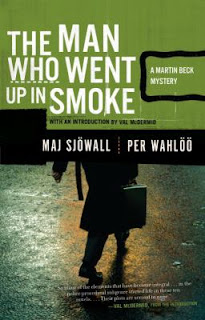 This week, our Nevermore group looked at The Man Who Went Up in Smoke by Maj Sjöwall and Per Wahlöö.  As the second novel in the Martin Beck series, The Man Who Went Up in Smoke reprises Martin Beck’s role as inspector for the Stockholm Homicide Squad.  Called back from his vacation and shipped off to Budapest, Beck is tasked with uncovering the fate of Alf Matsson, a well-known Swedish journalist who has mysteriously disappeared.  But when Beck begins investigating the whereabouts of Matsson, he discovers a criminal enterprise with international implications.  As a fan of Karen Fossum, Jo Nesbø, and Stieg Larsson, our reader is a fan of Nordic noir and mysteries—and she said she was incredibly pleased with Sjöwall and Wahlöö’s novel.  Short but complex, The Man Who Went Up in Smoke was a real treat.  It was the right book at the right time.

Next, Nevermore looked at Destiny and Power:  The American Odyssey of George Herbert Walker Bush by Jon Meacham.  Destiny and Power is an incredibly detailed and stunningly crafted biography that offers readers unprecedented access into the life of George H.W. Bush by drawing directly from his and his wife’s personal diaries and media accounts.  Bush is an intriguing personality in modern America for his unique experiences and his varied career in the military, Texas oil production, economics, and politics, and Meacham manages to shed light on the former president’s background without showing favoritism to either party.  As our reader pointed out, it’s “a book about a politician, but it’s not political—it’s about a man.”  And it’s quite an extraordinary book.  Although it’s a behemoth of a book (our reader admitted it took her more than three weeks to finish it), Destiny and Power is an incredible examination of an underestimated politician with a stunning and diverse career.

Switching gears from mysteries and politics, our readers jumped back in time to the Jurassic age with Raptor Red by Robert T. Bakker.  Set 120 million years ago, Raptor Red chronicles the imagined life of a female raptor as she stalks lush, vibrant landscape of prehistoric Utah and struggles for survival in her migration to the Pacific Ocean.  Bakker, a seasoned paleontologist, manages to bring together the best of both worlds by combining fact and fiction to create an extraordinary epic.  Our readers said it was an intriguing book that touched upon some of Bakker’s most controversial theories on dinosaurs.  After reading her son’s copy of Raptor Red and getting a taste of his writing, she said she’d like to take a look at another of Bakker’s books, The Dinosaur Heresies, which features dinosaurs in a new light as hot-blooded, highly intelligent creatures.

Last, Nevermore shared a brand new book by Randall Munroe titled The Thing Explainer.  Like his previous book, What If?, The Thing Explainer offers glimpses into complex science and engineering through intriguing illustrations—which include his familiar stick-figure depictions of human beings—and humorous explanations.  It portrays things such as the “food-heating radio boxes” (otherwise known as microwaves), the “big flat rocks we live on” (tectonic plates), and the “bags of stuff inside you” (cells), and then it explains everything using the one thousand most common words used in the English language and detailed diagrams.  Our reader said The Thing Explainer was an entertaining romp through physics, engineering, and astronomy that made him think differently about the “planes with turning wings” (helicopters) and the “boxes that make clothes smell better” (washers and dryers)—and the world in general.  It’s an amusing book that’s meant to be savored, he said, and he highly recommended it to other Nevermore members.