Kicking off our Nevermore meeting this week, one of our readers checked out The Mammoth Book of Extreme Science Fiction, edited by Mike Ashley.  A compilation of fantastical, far-flung science fiction short stories by authors, Extreme Science Fiction was an intriguing read populated by fascinating stories, like “Anomalies” by Gregory Benford, “Merlin’s Gun” by Alastair Reynolds, and “The Days of Solomon Gursky” by Ian McDonald.  Our Nevermore reader admitted that he devoured this book.  Although he found it riddled with stories that bordered more on extreme fiction than extreme science, he thought it was a very good collection.  It begins with “simpler” stories, but, as he continued reading, he found the stories became progressively more complex and, as the title attests, more extreme.  He said it was a pretty good book and he recommended it to other fans of science fiction. 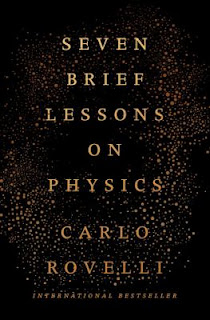 Following in the same vein, he likewise looked at Seven Brief Lessons on Physics by Carlo Rovelli.  In his book, Rovelli, an Italian theoretical physicist and author, takes some of the most complex mathematical equations and scientific phenomena, breaks it down, and makes it accessible to the average reader.  He explains everything from the formation of black holes to the influence of gravity to the creation—and possible purposes—for life on Earth.  Our Nevermore reader was incredibly pleased with Seven Brief Lessons on Physics.  Rovelli has an almost poetic quality to his work, driving home the most complex theories in physics and giving them a simplicity that makes them understandable for all readers.  He continued, saying, “[Rovelli] doesn’t make you believe or unbelieve, rather [he] gives you approximations of theories” and shares his knowledge in an easy-to-read and condensed format.  Overall, he said it was a very good book—and he even intends to purchase his own copy. 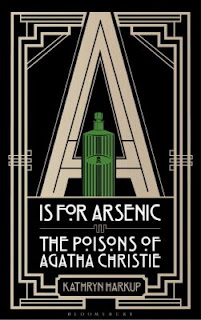 Next, Nevermore looked at Kathryn Harkup’s A is for Arsenic:  The Poisons of Agatha Christie.  “Agatha Christie used poison to kill her characters more often than any other crime fiction writer,” according Harkup.  “The poison was central to the novel, and her choice of deadly substances was far from random…”  Agatha Christie served in a pharmacy during both world wars, which gave her incredible insight into the effects of poisons on the body—and how such poisons could be administered in a variety of ways to commit murder.  Harkup, a former research chemist, delves deep into Christie’s novels and pinpoints various poisons used by the author and examines how they were used, how they interact with the human body, and how they are detected today and when Christie was writing.  Although our reader didn’t fully read A is for Arsenic, she gave a glowing review of it from her husband.  She said, “He had such a fun time with it.”  It’s complex and insightful, if a little technical, but he highly recommended it to others interested in chemistry.  Additionally, it kindled his interest in reading The Pale Horse, among other novels—and rekindled our reader’s love of Agatha Christie. 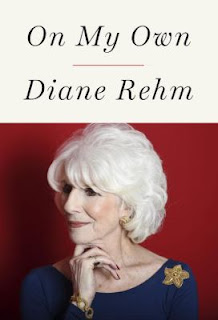 Last, Nevermore looked at a brand new memoir by Diane Rehm, On My Own.  In her deeply personal and incredibly poignant memoir, Diane Rehm opens up about her husband’s death.  John Rehm, who suffered from Parkinson’s disease, suffered a long drawn-out death that left Diane reeling and truly “on her own” for the first time in fifty-four years.  Diane Rehm offers a candid account of her struggle to create a new identity and reconstruct her life without her husband, providing insightful and tragic insight into the life and death of her husband—and his desperation to bring his own life to a close that culminated in his refusing to take food, water, and medication.  Our reader found On My Own to be a magnificent memoir, a piece that confronted the bereavement process and, more importantly, delved deep into the assisted suicide movement for Rehm works as an advocate.  Well-written and insightful, it’s a short piece that has a lot of impact for anyone who has ever suffered a close, personal loss and endured the prolonged death of a loved one.  She said it’s worth reading, recommending it highly to other book club members.
Posted by BPL Ref at 9:35 AM