The Professor and the Madman by Simon Winchester 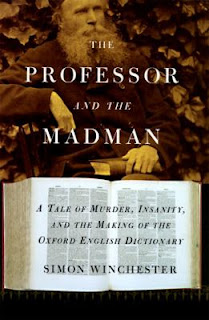 “It is known as one of the greatest literary achievements in the history of English letters.  The creation of the Oxford English Dictionary began in 1857, took seventy years to complete, drew from tens of thousands of brilliant minds, and organized the sprawling language into 414,825 precise definitions.  But hidden within the rituals of its creation is a fascinating and mysterious story—a story of two remarkable men whose strange twenty-year relationship lies at the core of this history undertaking,” reads the book jacket of The Professor and the Madman by Simon Winchester.

And it is the story of two men:  Professor James Murray, an educator at Oxford and editor at the OED project, and Dr. William Chester Minor, a military surgeon who served in the American Civil War and became a prolific contributor to the dictionary.  Minor submitted thousands of neat, handwritten quotations for use by the Oxford English Dictionary (or OED) and offered hundreds of etymology slips to track the origins of words; however, he wasn’t a traditional contributor.

Minor was a patient at Broadmoor in Crowthorne, a mental institution in the English countryside for the criminally insane.  He was incarcerated until “Her Majesty’s Pleasure be known” after he murdered George Merritt, an Irish day laborer, in a delusional haze.  Despite his indefinite imprisonment, he and Murray, who was head editor of the OED at the time, struck up an unusual and rather unconventional relationship—and kindled a shared obsession—that helped make the dictionary an incredibly prolific and vast repository of the English language.

I was pleasantly surprised by The Professor and the Madman.  I’d seen it in passing once when I was collecting a stack of books and, of course, the subtitle caught my attention almost immediately:  A Tale of Murder, Insanity, and the Making of the Oxford English Dictionary.  I mean, how could I not be intrigued?  What did murder have to do with the creation of the OED—and who was the madman supposedly involved?

I certainly had to find out, and I was quickly enchanted by the story of Professor Murray and Dr. Minor.

Professor James Murray and Dr. William Chester Minor were both brilliant individuals.  Intelligent and bright and astonishingly innovative, they were the backbone of the Oxford English Dictionary for a number of years, but they walked two very different paths.  Minor was a man of means, a gentlemen of substantial wealth who spent his childhood on Ceylon (what is known today as Sri Lanka), before traveling to the United States and enrolling at Yale.  He earned his degree as a doctor and joined the Army as a medical surgeon, participating in American Civil War, which left an indelible mark on him, possibly spurring his bout of madness that eventually landed him in Broadmoor.

Professor Murray, on the other hand, had a far more humble upbringing.  Born in Denholm, Scotland, Murray received only a rudimentary education, before he was forced to leave school to help support his family; however, his voracious appetite for learning encouraged him to continue his education and he learned several languages, including German, French, Dutch, Hebrew, Aramaic, and Latin, among others.  He worked as a teacher, an administrator at the Chartered Bank of India, a curator at the British Museum, before he became one of the most notable scholars at Oxford and editor for the OED.  (As an interesting aside, he trained local cattle to respond to him when he spoke to them in Latin—a curious trick that made him an intriguing individual in my book.)

Part narrative and part biography, The Professor and the Madman describes how these two individuals, who grew up in very different worlds, eventually became acquainted when Minor discovered the dictionary project and struck up a correspondence that lasted more than twenty years.  Simon Winchester’s book is an interesting creation, reminiscent of Erik Larson’s works in that it manages to make history sparkle, so to speak.  It makes history accessible and, sometimes, amusing, taking something that’s sometimes dry and stale, making it into a fascinating and informative epic.  Personally, I loved every bit of it.  It appealed to my love of language and my love of history, offering glimpses into both the creation and the history of the English language and the motivation behind one of the language’s most comprehensive books.

Yes, I found it was sometimes slow going.  (I’m very prone to distraction, I’m afraid, and I had a lot of books on my mind at the time.)  However, I was intrigued and enchanted by The Professor and the Madman.  It borders on light reading, meaning it isn’t dense and overwrought; moreover, it didn’t bog me down with unnecessary details or overwhelming passages of history.  It gives you all the best parts and, best of all, it reads like a novel.  More to the point, I found Winchester’s book wasn’t very grim.  Yes, Dr. Minor was entirely mad; yes, he was put in an asylum for the criminally insane; and, yes, his psychosis was alarming and sometimes violent (i.e. the murder of George Merritt), but I found it wasn’t particularly graphic or stomach-churning.  The bit about “self-abuse” and self-mutilation did make me feel a bit squeamish, but it’s only a short, violent section in an otherwise delightful book.

Overall, I enjoyed reading The Professor and the Madman.  Wonderfully detailed and remarkably crafted—and incredibly precise—Winchester’s book is a fantastic read.  It appealed to me on so many levels as a reader by making the English language and its history accessible and, more importantly, telling a richly woven story about Murray and Minor that opened my eyes to a new aspect of history.  While others might not find it as amusing or interesting as I did, I think all readers will be able to appreciate the effort and skill Winchester puts into this incredible book.
Posted by BPL Ref at 10:21 AM