Sidney Chambers and the Shadow of Death by James Runcie 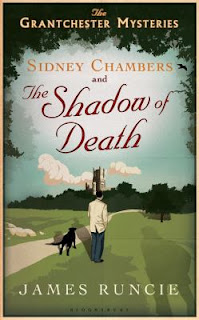 Sidney Chambers, vicar of Grantchester, is an unlikely sleuth.  He is as surprised as anyone when he’s approached by an attractive woman who wants him to investigate the suicide of a local solicitor.  Mrs. Pamela Morton is convinced that her husband’s partner, Stephen Staunton, would not have killed himself because they were making plans to run away together. She can’t go to the police because that would mean the affair would be made public. Sidney can make inquiries, she believes, because he is a priest and people will tell him things.  For his part, Sidney isn’t certain that this is part of his job description; and yet, if what the woman says is true, then there may be a murderer in the community.

So begins the first in the series of Sidney Chambers mysteries. This book is actually composed of several novella type stories, linked closely with characters and subplots but dealing with other crimes, including  the theft of a valuable ring at dinner party and an art forgery. The time is 1953, and the social mores of that period are important to the books: this is an era where England still has the death penalty, opportunities for women are limited and advancement is often through marriage, and the shadow of World War II still looms large.

Sidney served in the War and has seen his fair share of death and violence, but he hasn’t become jaded.  In fact, quite the opposite: he looks for the best in everywhere.  He loves jazz, detests sherry (he prefers Scotch), and at 32 is still unmarried, though he is definitely attracted to Amanda.  She’s not the sort who would be happy as a priest’s wife, he feels, so he tries to keep their relationship strictly on a friendly basis. He also finds himself drawn to Stephen Staunton’s widow—who happens to be German.

Geordie Keating, a local police inspector, is a good friend as well.  They meet to play backgammon at the pub, and Geordie isn’t adverse to encouraging Sidney to ask questions at times, question that the police wouldn’t be able to ask.  Geordie and Sidney don’t always see eye to eye; Geordie’s world is much more black and white, while Sidney’s experiences make him see more shades of grey and his faith demands that he judge not.  And though Sidney finds he enjoys the challenge of the mystery, he is bothered by how it changes the way he views the world.  As he himself notes, being a priest requires that he think the best of people but being a detective requires that he think the worst.

I picked this book up because I had seen the series Grantchester on PBS and was intrigued.  The characters had so much depth and were so nuanced.  I found the book to be even more fascinating.  Sidney is the sort of person we would like in a clergyman: compassionate, understanding, and devout.  He’s more likely to judge himself than to judge others.  But he is also a passionate man, one who sometimes feels he falls short in carrying out his duties, who indulges himself at times, and who can be impatient and frustrated.  He is trying very hard to be a better person and a better priest, and that’s what I find most appealing.

The relationship between Sidney and Geordie is complex and intriguing:  they are both men of integrity, but their views are sometime quite different which creates a certain amount of conflict between them. I like that there have been no easy answers, no sudden capitulation on either side.

In addition to Geordie, there’s an interesting cast of supporting characters including the housekeeper who isn’t sure Sidney is up to the job.  She’s also most unhappy when Sidney acquires a puppy, a Lab named Dickens.  Sidney's curate, Leonard, is quietly gay; after all, at this time in British history, homosexuality is a crime punishable by imprisonment.

I also felt that the author did a good job at evoking the 1950s without beating us over the head with it. Some authors feel obliged to stick in all sorts of showy detail to convince a reader that research has been done.  This was more low key, but effective because it dealt more with attitudes and social convention than with physical trappings.

After reading the book, I wanted to know more about the author.  James Runcie knows his subject better than most because his father was an Anglican priest and in fact became Bishop of Canterbury.  While the books aren’t biographical, Runcie said he wanted to pay tribute to his father through the character.

Runcie was also interested in portraying how British society has changed over the years.  He chose 1953 because it was the coronation year for Queen Elizabeth.  The plan is for there to be six novels that cover 25 years.  I find that idea fascinating and am anxious to read more.

Note:  The library owns a copy of the first season of Grantchester. Author Runcie is also a filmmaker, which may explain in part why the transition from book to film went so well.  The episode plots vary a bit from the book, but the spirit of the story and the characters translate very well from paper to film at least in this first series.  I gather the differences are greater in the second. 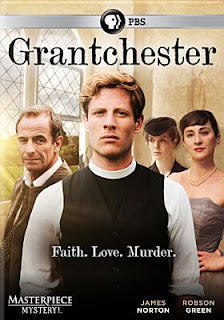