Vanished: The Sixty-Year Search for the Missing Men of World War II, by Wil S. Hylton 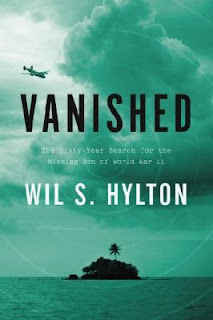 The book begins with the story of Tommy Doyle, born during World War II, but never knowing his father who was a serviceman killed in the conflict.  The curious thing was that his mother never said anything to the boy about his father’s death.  Did he die a hero?  As Tommy grew up he came to hear disturbing whispers that his father was not dead, but had survived the war, returned home, married someone else, and was then living in another state.

Tommy knew that his mother  had an old trunk, and he came to suspect that it held answers to guarded family secrets.  Even after she died and Tommy was married, he could not bring himself to open the trunk.  Its presence seemed to dominate the family household and to threaten black revelations best left undisturbed. But Tommy’s wife Nancy was of a different personality, and she asked permission to open the trunk.  He agreed, and it was found to contain many personal items, including loving letters to his wife that Tommy’s father had written from outposts in the Southern Pacific.  But why it had remained locked for so long remained a mystery. Nancy encouraged Tommy to seek more information about his father and the circumstances of his death. And this search becomes the theme and core of the book.

They began with the obvious and known facts. His father, Jimmie Doyle, had been a gunner on an American bomber known as the B-24 “Liberator” that was shot down during a mission against the Japanese-held island of Palau in the Southern Pacific.  The body had never been recovered, the plane’s wreckage had never been located, and Jimmie was officially “missing in action.” Government sources had little additional information, but Tommy and Nancy soon made contacts with relatives of other MIAs who were ready with friends and suggestions who would help.  The search led to Palau, where aging tribesmen described the crash of an American plane.  Confusion about their accounts led to the discovery that on more than one occasion American bombers had crashed on the island; indeed, there were three.  Search efforts were conducted on the island and in the surrounding waters; technical information about the B-24 “Liberator” was extracted from Ford Motor Company archives, which had built the plane.  Families of the other crew members joined in the effort.  The quest led in many varied directions, including the life of Charles Lindberg and his participation in the American war effort in the Pacific.  The entire strategy of the Pacific War was explored in order to understand why fighting came to that lonely little island of Palau.

At this point the temptation is to say nothing about the ultimate results of the search and let the reader dig out the facts himself.  But we will leap ahead to the conclusion and say that the day finally arrived when the correct wreckage was identified, its contents were removed, including body parts, and among the items a dogtag with the name DOYLE.  More recent DNA analysis led to the conclusion that in the wreckage the remains of five men could be identified and the remaining body parts were buried in April 2010 in Arlington National Cemetery in an appropriate service.

Today Palau is an island country with close ties to US.  It consists of about 250 islands, with a population of 20,000 and is located SE of the Philippines and N of New Guinea. The natives are related to the Filipinos. Palau’s chief economic resource is tourism plus some fishing. The currency is the dollar. Palau’s history has been rather chaotic.  It became a Spanish colony in 16th century, but it was sold to Germany after 1898. During World War I, it was seized by Japan; then during World War II it was taken by US and made part of US Trust Territory in 1947.  It became fully independent in 1994 and is a member of the United Nations.
Posted by BPL Ref at 10:18 AM