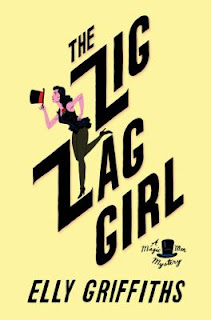 As the book opens, a body has been found in Brighton.  Actually, it isn’t an entire body but two pieces of a body, upper section in one box and legs in another.  The middle is missing.  It’s a shocking sight, and one that reminds Detective Inspector Edgar Stephens of a magic trick he’d seen done while in the service.  He’d been assigned to a special operations unit nicknamed the Magic Men, whose specialty had been to create illusions of troops and armaments to fool Hitler’s intelligence agents.  Max Mephisto had been a member of the unit—and Max had originated the Zig Zag Girl trick. Edgar decides to contact the other members of the group to see if any of them can shed light on this grisly murder.

I’ve been an Elly Griffiths fan since I read my first Ruth Galloway mystery, so I was looking forward to this new series.  The story got off to a rousing start but then bogged down a bit for me.  I think there was a touch of “First in Series Syndrome,” which I define as an author spending time on background and setting the stage (no magic show pun intended!) for future books.  The last third of the book picked up considerably and had me turning pages to the conclusion.

For me, Max Mephisto emerged as the most memorable character.  Policeman Edgar is a bit bland, but may develop further.  There were some interesting side characters who may or may not show up in the next book; I hope they will, as there is potential there.  As for the mystery itself, there were times when it seemed to me that it was relegated to the background.  This works in the Ruth Galloway series, because I’m just as invested in Ruth’s life as I am in the death du jour; here, I wasn’t as engaged with these characters so I noticed the lack of progress more.

The 1950s England setting was interesting, but not quite as well developed as I might have liked.  Mostly what I noticed were the winks to the audience, as it were:  a character maintains no one will go see the new Agatha Christie play, The Mousetrap, because audiences won’t want to see something as serious as a mystery. Variety shows will always pack them in.  Similar observations are made about that flash in the pan, television.

This is a promising first book in a series. Griffiths writes well as always, and her enthusiasm for the variety show, especially the magic acts, shines.  Yet it was easy to put the book aside for awhile.  I’ll certainly read the second, but that book will probably determine whether I continue with this series or not.
Posted by BPL Ref at 11:08 AM