From Rocket Boys to October Sky by Homer Hickam, Jr. 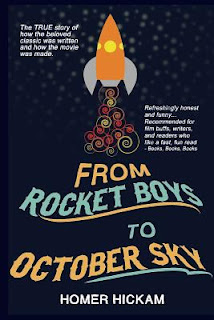 It’s always a bit of a gamble when a book is turned into a movie.  Most of the time the movie loses many of the layers, the nuances, of the book, although there are rare exceptions (*cough* “Jaws” *cough*) Good or bad, I frequently wonder how the book author feels about seeing his or her creations brought to life.

That’s why I wanted to pick up a copy of From Rocket Boys to October Sky by Homer Hickam.  As the title indicates, the book is his take on the process of how his story was turned into the movie “October Sky.”  The first surprise was that technically, the film was not based on the published book; Homer was still writing it.

The process began when Hickam wrote an article for the magazine Smithsonian Air & Space. He’d written articles for the publication previously, but this time he decided to write about what it was like to have been a kid growing up in a West Virginia coal town in the 1950s and wanting to build rockets.  The article was a bit of a sensation, and requests for more stories about the “Rocket Boys” came in—including two inquiries from independent film companies.  He found an agent, wrote out a ten page synopsis, and the next thing he knew, his life story had been optioned by Universal Pictures.

The rest of the book explains both the process of movie making and Hickam’s struggles to put the youthful portion of his life on paper.  One of the things I appreciated about the story is that he tries to be fair to all concerned.  This isn’t a hatchet job on Hollywood.  There were changes made that seemed totally unnecessary—changing his father’s name from Homer to John, for example—while other changes sacrificed accuracy to either move the film along or to be more visually pleasing.  At dinner one night, Hickam tells the director that the chemicals the boys are using in a scene couldn’t ignite.  The director replied, “You do realize, Homer, that we’re only trying to sell popcorn here, don’t you?”

This isn’t a gossipy book about backstabbing in Hollywood or demanding actors, though the actors are always on the lookout for that little something to give their performances more depth—or themselves more screen time.  There’s a very young Jake Gyllehaal in his first starring role, Chris Cooper as Homer Hickam, Sr.—er, I mean, John—and Laura Dern as Miss Riley.  The book is brief, but covers a lot of territory.  I enjoyed some of the behind the scenes tidbits (for example, noted train photographer O. Winston Linke had a cameo in the movie as an engineer.)   A few mysteries were cleared up along the way.  While Hickam titled his book Rocket Boys, the studio didn’t like that as the movie title.  Someone realized that “October Sky” was an anagram of Rocket Boys and reflected the Sputnik launch which helped inspire young Homer and his friends.

I enjoyed the book.  If I had any quibbles at all, it would be with some of the layout and typeface which I found a bit off-putting at first.  Linda, Homer’s wife, was allowed to take photos during some of the filming so there are some behind the scenes shots as well as some old photos of the real people involved in the story.

Now I want to watch the movie again!

Homer Hickam's website is www.homerhickam.com.  His latest book is the novel Carrying Albert Home:  The Somewhat True Story of a Man, His Wife, and Her Alligator.
Posted by BPL Ref at 9:39 AM