Garden of Lies by Amanda Quick 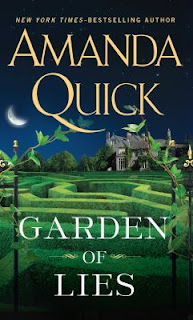 Ursula Kern is a self-made woman.  Smart and resourceful, and owner of a particularly successful secretarial agency, she has managed to make a living for herself and other women who find themselves in need of a career—no small feat in Victorian London.  Her business is running smoothly and her life is uneventful, until she learns that one of her best secretaries at the agency and her dearest friend, Anne Clifton, has died.  Ursula is convinced it was foul play, but, in order to uncover the truth, she’ll have to undertake a dangerous investigation with the help of Slater Roxton, an archaeologist and adventurer with a slew of secrets.  But Slater and Ursula soon find out that the killer is more diabolical and desperate than they ever imagined, and he’s willing to go to extreme lengths to protect his criminal enterprise.

Garden of Lies is a short novel, a quick romance that I picked up on a whim and finished in about two days.  I found I enjoyed the dark and sultry world of Victorian society that Amanda Quick conjured.  It’s deliberately scandalous, riddled with intrigue and adventure, and it’s interesting to see how the plot unfolds.  I have to admit, I was curious to see who was the villain in this work—who had ultimately crafted such intricate designs on the main characters of the novel and who was still pulling the strings—and I was eventually rewarded for my perseverance.

However, I wasn’t entirely impressed with Garden of Lies.  I found the character development lacking, leaving me with a sense that the characters didn’t really mature or change as the story progressed, which made them feel rather bland.  Truthfully, I liked Ursula—there’s something about her character, her care to wear heavy hat pins and her calm demeanor in the face of danger—and Slater.  They cut dashing, adventurous figures in Quick’s novel, and I ultimately liked them; nevertheless, I found their relationship a touch too spontaneous and their personal development seriously lacking.  They are, more or less, fully formed individuals at the beginning of the book and they don’t change much:  they’re static, stagnate—one might even say boring.

Likewise, I wasn’t completely enamored with the plot.  I was intrigued, and I was certainly curious to see where Ursula and Slater’s investigation would lead, but I wasn’t particularly thrilled with the surprise Quick tried to spring on her readers or the twists her characters took in their search for answers.  Dare I say it, it was a predictable romantic adventure that lead to results that, confidentially, I expected as soon as I recognized the main players—which was a little less than halfway through the novel.

I think Garden of Lies is best enjoyed if you like romances tinged with a little adventure and mystery.
Posted by BPL Ref at 10:07 AM