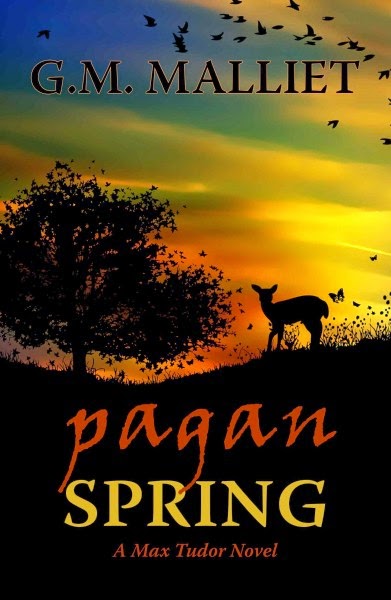 Pagan Spring by G.M. Malliet is the third entry in the “Father Max Tudor” series.  Father Max presides as the C of E priest in the village of Nether Monkslip and solves murders on the side.  It’s not a priest’s usual job, but then Max isn’t your usual priest:  he’s a former MI 5 agent and he’s trying to figure out a way to explain to his bishop that he’s in love with Arwen, the town’s neo-pagan shopkeeper.  He’s a sympathetic ear to the quirky townsfolk, a voice of reason, and certainly good-looking, as the female portion of his congregation is apt to note.

In this third book, the village is somewhat agog over new residents Thaddeus and Melinda Bottle--“somewhat” because Thaddeus’ estimation of his fame and importance doesn’t quite align up with reality. He was indeed an actor and dramatist in the West End, but his productions haven’t fared well of late.  He left London in a snit, and when the expected pleas for his return didn’t materialize, he ended up settling down in his childhood home of Nether Monkslip.  After a dinner party to welcome the new couple, a guest is found dead-- and probably not from natural causes. Given the unpopularity of the deceased, there’s no shortage of suspects.

As with the previous books in the series, solving the murder isn’t the main pleasure of the book.  It’s the setting and characters which keep the pages turning. Malliet has a playful sense of humor and creates interesting characters, most of whom I would want to meet and some I feel I have:  she has the knack of creating fictional folk sure to remind you of someone you already know. The scenes with the village writers’ group are always interesting as Malliet pokes gentle fun at some authors’ egos.  Some of the plot lines in this one are a bit convoluted and I’m not sure I bought some of them, but since I’m more character-oriented I still enjoyed the book.

And that gets to the heart of the matter.  Max Tudor is an interesting character.  He's still trying to come to terms with an incident in his past that led him away from the spy business and into the Church. Father Max isn't quite as devoted to Church doctrine as some would like, but he does have faith.  His investigations are aimed at finding the truth, not at delivering judgment, but he does love the hunt. His lady love, Arwen, is a kindred spirit, willing to sing in the Church choir even if her beliefs aren't exactly Anglican approved. She's more Earth mother than nymph, a vegetarian and herbalist. It's the characters who keep me coming back for more.  Even though Arwen doesn't play much of a role in Pagan Spring (she's away at a conference) she's very much on Max's mind.

If you like English village cozies, give Malliet a try.  The plots aren’t as intricate as Agatha Christie’s, but the village setting is well done—at least from this American’s perspective. Some UK reviewers have other opinions, just as they did with American Martha Grimes’ British mysteries.   It's always the little things that trip up non-natives, and such seems to be the case here.  I had wondered about a small point or two in an earlier book, and checked to see if the author was American or British. The bios at that time were a bit coy, with education in the UK but now living in the US.  I took that to mean not a native Britain. While that didn't lessen my enjoyment, it did make me take some things with a grain of salt.

Since the titles are all tied to seasons (Fatal Autumn, Wicked Winter, and Pagan Spring), I do hope the series continues past summer.