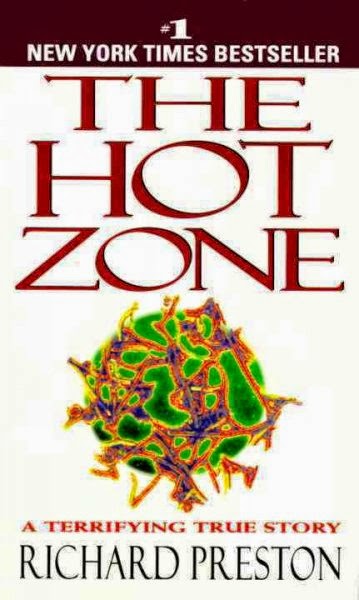 Reviewed by Jeanne
Anyone listening to the news these days has heard of Ebola, the frightening virus claiming so many victims in Africa.  There was a bit of an outcry when two Americans infected with the virus were brought to the U.S. for treatment.  Some were horrified at the idea this disease was in the country.
Actually, a strain of it has been here for decades.

Back in 1995, someone suggested I read a book called The Hot Zone by Richard Preston.  It was the true story about a disease outbreak but was as compelling as any novel, I was told.  Ebola wasn’t anything I’d ever heard of before, and I wasn’t sure the book was anything I wanted to read.

The story is spun in two parts.  The first deals with the emergence of the filoviruses, the category to which Ebola belongs.  One of the first was Marburg, named for the German port where a worker came down with a viral hemorrhagic fever. The symptoms include high fever, severe headaches, and bleeding, usually from multiple sites.  The mortality rate is high; about a quarter of the patients who contract the disease will die. That number was bad enough, but a worse one was about to emerge with the discovery of Ebola.  The symptoms are similar, but the Ebola outbreak killed about 75% of its victims.

The second part of the book concerned a lab in Reston, Virginia, which housed a number of primates including some from the Philippines who turned out to have a variant strain of the Ebola virus.  While this strain turned out not to be transmittable to humans, the story of the way the situation was handled kept me on the edge of my seat.

My friend was right about The Hot Zone.  The book was absolutely riveting and more than a little terrifying.  It’s not just a story of petri dishes and microscopes but a very human story.  It’s also a mystery, as researchers try to figure out where Ebola and related viruses originate.  They seemingly appear out of nowhere in populations and then vanish again.

I finished the book with enormous respect for the brave doctors and researchers who try to identify these diseases and who care for the ill.  I admit I wept a time or two, but the narrative kept me turning pages. I went on to read another book or two on the subject, but I have to say that Preston’s remains the gold standard for me in terms of information and readability. If you haven’t read it, I highly recommend it.
Posted by BPL Ref at 10:35 AM