Ballyhoo, Buckaroo, and Spuds: Ingenious Tales of Words and Their Origins by Michael Quinion 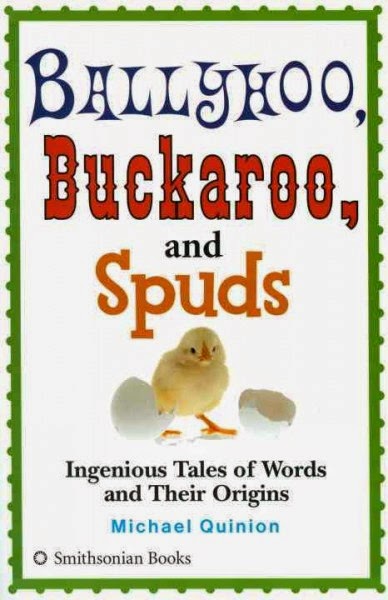 I happened upon a show called “American Slang” on the History Channel.  It was so interesting because it explained the origins of words like “saloon,”  “hillbilly,” and “Yankee.” It was so good that I decided to look for a book about word origins at the library and found Ballyhoo, Buckaroo, and Spuds by Michael Quinion.  He worked on the Oxford English Dictionary so he really knows his stuff and traces the words back to the first times they were used.

Quinion tells you about the history of slang words and phrases but also tells you what isn’t true.  There are a lot of stories that sound good but aren’t factual.  For example, I had heard a story about “Stow High In Transport.”  The story was that animals being shipped would relieve themselves and the results would seep into passengers’ boxes and luggage.  Therefore these fouled items would be chalked “S.H.I.T.” to warn of the excrement  and that was where we got the word.  However, he says this is an urban legend.  He debunks a number of the more fantastical word origins, and his explanation for others is a bit different than I expected.

One of these is the word “Dixie” meaning the South.  Quinion describes several of these, including the one about the money (“dix” is French for “ten” and referred to Louisiana banknotes).  He believes it goes back to the Mason-Dixon Line and therefore refers to the name of the surveyor John Dixon.

I have really enjoyed reading this book.  It’s set up alphabetically by words and phrases so you can pick and choose what you want to know about.  Some of the most interesting ones to me were actually ones I’d never heard of, like “Black Maria.”  That’s the name for a police van to transport prisoners.  Quinon traces it back to a famous black racehorse.  This was back when these police vans were horse drawn and usually black. Now they’re better known as “paddy wagons” but he doesn’t explain that one, darn it.

Needless to say, I could go on and on like this but it would be easier for you to pick it up—once I put it back on the shelf, that is!  Enjoy!
Posted by BPL Ref at 6:16 PM