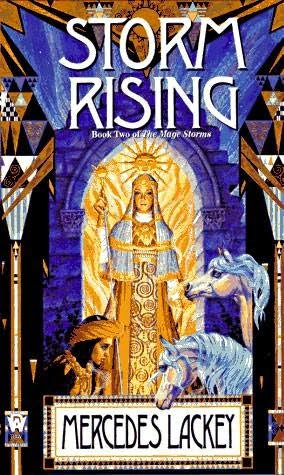 
Storm Rising is the second book in Mercedes Lackey’s Mage Storms Trilogy, part of her ongoing series about the country of Valdemar.  In Storm Warning, a series of unprecedented mage storms struck Valdemar and all the surrounding lands, wiping out all magic-made things in their path and creating suspicion and fear between the countries.  In the first book, Valdemar had combined forces with their mages and non-mage scientists to come up with a method for establishing a breakwater, a temporary measure to protect them from the mage storms long enough to come up with a more permanent plan.
Storm Rising opens on the heels of the establishment of the breakwater, as the exhausted mages and scientists of Valdemar struggle to find some permanent solution to the problem.  Karal, the newly-appointed envoy to Valdemar from Karse, has ideas for solving to some of the alliance’s problems, but few take him seriously because of his youth.  Firestorm, handsome, gifted, and hopelessly in love with An’desha, is tempted to use his mage powers for evil in order to get An’desha to love him back.  A more confident An’desha, oblivious to all this, seeks more ways to use his powers and knowledge to help against the mage storms.  Grand Duke Tremane of the Empire, Valdemar’s long time enemy, is camped in Hardorn, a neighboring land unprotected by Valdemar’s breakwater. Tremane is trying to find ways for his men and the city to last out the winter without magic.
Before long, the Valdemarians decide that they need to ally themselves with Tremane.  They plan to pool resources with Tremane in order to defeat the mage storms once and for all.  While there is evidence that Tremane is fair and honest, he was also responsible for the death of Ulrich, Karal’s beloved mentor and friend. Karal must weigh his personal feelings against the safety of the people, and try to trust in Tremane.
Will the older members of the court accept Karal as a viable envoy with relevant ideas and input?  Will Karal be able to put aside feelings of anger and vengeance, and work side by side with Tremane?  Will Firesong stop wallowing in self-pity and become part of the solution instead of part of the problem?  And will any or all of them finally find a way to end the mage storms before it’s too late?  Read Storm Rising to find out.
If you’re an adult who loves fantasy, good vs. evil stories, and characters so realistic you think you know them personally, then I highly recommend this book to you.  I truly enjoyed this book, and I cannot wait to read the next one in the Mage Storms Trilogy:  Storm Breaking.
Posted by BPL Ref at 9:25 AM