Winds of Fate by Mercedes Lackey 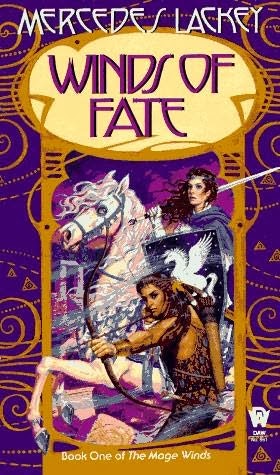 The next novel written in the Valdemar series, Winds of Fate, centers around a woman named Elspeth, Herald and Heir to the throne of Valdemar (daughter of Queen Selenay).  We first met Elspeth as a young girl.  Series readers will know Elspeth’s early background from the first Valdemar trilogy  (Arrows of the Queen, Arrow’s Flight, and Arrow’s Fall) which centered on Talia, the Queen’s Own Herald, who served as confidant, advisor, and protector to the Queen and to her daughter.  In Winds of Fate, Elspeth is the adult Heir to the throne.

In this installment of the series, an all-out mage war threatened the kingdom.  Valdemar had had no mages, adept or otherwise, since the death of Vanyel, the last Herald-Mage, long before Elspeth’s time.  Now the mage war loomed; their enemies had mage power, and Valdemar did not.  Nevertheless, Elspeth believed that the mage ability had not left the people of Valdemar; it was simply that no one currently had the power to recognize it in its latent state.  Moreover, even if they were to find someone with mage potential, there was no one to train them. To Elspeth, the best course of action would be to send an emissary to other trusted nations (and potiental allies in the conflict) to ask for someone to seek out and train mages in Valdemar. This emissary would have to be someone with the authority of the throne—either Elspeth or the Queen. Since the Queen could not be spared, Elspeth was the logical choice.

Elspeth’s idea was opposed by the Queen and Council.  Elspeth felt they still thought of her as a little child, and no amount of training or maturity would ever change their minds.  However, Elspeth’s plan received the unexpected support of her plan from a group of allies whose advice the Queen and Council were forced to respect.  Queen and Council reluctantly agreed, on condition that Elspeth take along one other Herald for advice and added protection.  The Queen and Council chose Herald Skif to accompany her.  Elspeth was glad that if she had to bring someone along, it was Skif, for he had always been like a big brother to her.

Skif and Elspeth set out on their journey, alone except for their Companions, horse-like creatures who share a mental bond with their Chosen human. Then the complications really began.  Disagreements between Skif and Elspeth constantly arose: when to go in disguise and when to wear their Herald Whites, when to spend money and on what, and most importantly, whom to trust with the truth of their identities and their mission.  To make matters worse, Skif began to have feelings for Elspeth that were anything but brotherly, but Elspeth did not reciprocate.  This heightened the tension between them.  Before long, Skif began to challenge Elspeth’s every decision with critical disdain at best and outright argument at worst.  On top of all that, they had to change destinations and plans mid-journey.

They finally reach the Hawkbrothers, humans with a magical connections to birds, who might be able to help.  Unfortuanately, they found the Hawkbrothers on the eve of battle with an adept mage named Mornelithe Falconsbane, a man  both powerful and evil beyond imagination.  Exhausted from the journey and from attacks along the way, Elspeth, Skif, and their Companions were then forced to prove they could both be trusted to help and also that they could be of some use in the upcoming battle.  They finally joined forces with the Hawkbrothers to fight Mornelithe Falconsbane.  Would their strategies be enough to defeat him?  If so, would the Hawkbrothers be convinced to help them with recognition and training of mage ability for Valdemar?  Moreover, what would happen in the relationship between Skif and Elspeth?  Find out by reading Winds of Fate, the first in The Mage Winds Trilogy of Valdemar.

I found this book hard to read in places, but that may just be the fact that I do not like to read about the antagonist and his motivations and/or actions.  There were whole sections written form the point of view of Mornelithe Falconsbane, and I found it difficult and unpleasant to get into his mind even for a short time.  However, there were also whole sections written from the point of view of Darkwind, one of the Hawkbrothers, which I also found difficult to read in places.  Perhaps that was difficult for me because Mercedes Lackey, the author, is personally involved in the conservation of American falcons, hawks, and other birds, and I felt she included far more technical bird information than I wanted to know.  It seemed to me to slow the story down some.  However, with all of that, it is still and good and interesting story, and there were places where I could not put it down.  I would not recommend it for children, though, due to the intense journeys into Mornelithe Falconsbane’s twisted mind and activities.  However, any adult who loves fantasy, stories about mages and magic, or even someone who loves birds and the conservation thereof, will probably enjoy this book.

My next review will be about the sequel to Winds of Fate, called Winds of Change, and the one following that will be the final book in the trilogy, Winds of Fury.  For an overview of the Valdemarian universe, please visit this link:  Valdemar..
Posted by BPL Ref at 9:42 AM