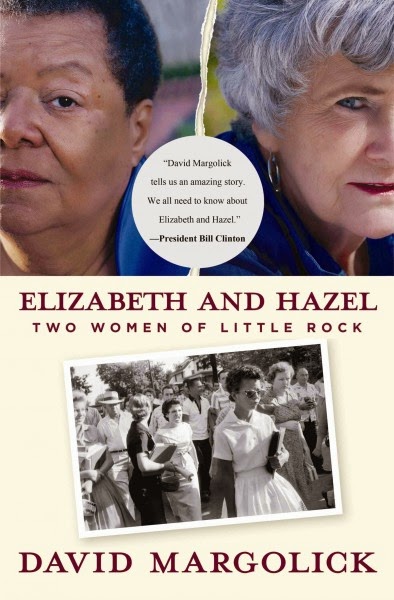 In 1957 Little Rock, Arkansas agreed to comply with the Supreme Court ruling that segregated schools were unconstitutional and carefully selected nine black teenagers to attend the local Central High School. Of the Little Rock Nine, perhaps the most recognizable is Elizabeth Eckford – or at least the fifteen year old version of Elizabeth.

On the first day of the segregated school year the National Guard blocked the students of color from entering the school at the order of the Governor of Arkansas. He wanted to appease segregationists. Walking by herself, Elizabeth made her way up the street, through the crowd, towards the school only to be denied again and again by the soldiers. Finally deciding to retreat Elizabeth headed for the bus stop as the angry crowd followed close behind. They hurled racial epithets at her and told her to “go home”. One young white girl, the same age as Elizabeth, fell in line right behind her and joined in. That’s when Will Counts snapped his famous photograph.

In Elizabeth and Hazel: Two Women of Little Rock, David Margolick tells not only the story of that picture but the aftermath as well – how it affected the lives of each girl. Elizabeth, probably already dealing with depression beforehand, sank even deeper during her thirties after the birth of her two children. She was so depressed she couldn’t work and soon fell into poverty. The white girl in the photo, Hazel Bryan, married young and went on to have several children and grandchildren. Neither woman particularly felt they fit in anywhere, however. Elizabeth was withdrawn and slow to open up. Hazel always had a bit of a wild, independent streak – even in her older years when she stopped going to church and took up belly dancing.

Each anniversary of that September day brought new interest to the photo and Elizabeth herself. She was often asked to speak at events and sometimes did so even though it petrified her. With the 50th anniversary looming in 1997, Will Counts suggested another photo be taken with Elizabeth and Hazel. This time a photo of reconciliation. Both agreed and soon the picture was printed on posters to be sold in the local visitor center. Soon after, much to everyone’s disbelief, Elizabeth and Hazel became friends. Between their speaking engagements, they went to flower shows, took day trips, and went out to dinner. Many people were skeptical of this new found friendship. How convenient Hazel had a change of heart during the 50th anniversary. What they didn’t know, however, was that Hazel had actually tracked down Elizabeth’s phone number and apologized to her decades earlier.

Unfortunately, the friendship lasted less than two years. Although at first she seemed to believe Hazel to be sincere in her apology, Elizabeth felt that Hazel wanted forgiveness too easy. She wanted to gloss over their history without any real introspection and begin anew. Hazel, on the other hand, felt Elizabeth was stubborn and lived too much in the past. Their relationship soon dissolved. They have only spoken twice since the end of their friendship (once right after 9/11) and Hazel sent her condolences when Elizabeth’s son died.

This book was fascinating and heartbreaking. Both women suffered for their brief friendship. Neither whites nor blacks could understand why they were doing this, and both Hazel and Elizabeth dealt with harassment.  However, some good came from it. Hazel helped Elizabeth come out of her shell a bit (she began speaking at more engagements with a little more ease), and Elizabeth offered Hazel simple companionship – something not in particular abundance for Hazel. I must admit I did want them to reconcile once more. Who doesn’t want a happy ending? Especially after reading that Elizabeth admits to missing Hazel, and how Hazel’s eyes tear up when speaking of Elizabeth. So there’s no happy ending for now but I suppose there’s still time for them to come around. In the meanwhile, I’d highly recommend this book.

Psst! Speaking of women and history, March is Women’s History Month! Here are some other books about historical ladies if you’re interested:
Hedy’s Folly: The Life and Breakthrough Invention of Hedy Lamarr, the World’s Most Beautiful Woman by Richard Rhodes
Pink Sari Revolution by Amana Fontanella-Khan
Girls of Atomic City: the Untold Story of the Women Who Helped Win WWII by Denise Kiernan
The Immortal Life of Henrietta Lacks by Rebecca Skloot
I Am Malala: the Girl Who Stood Up for Education and Was Shot by the Taliban by Malala Yousafzai
Posted by BPL Ref at 12:11 PM