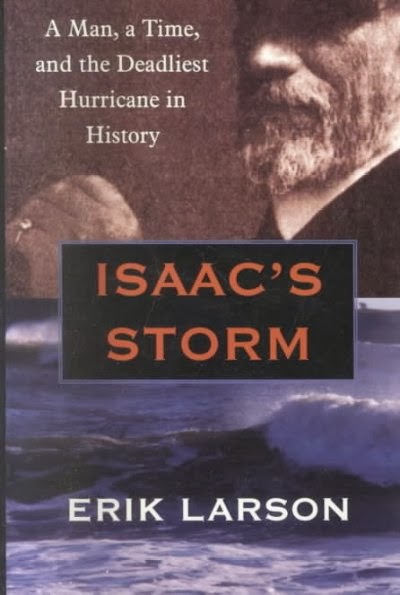 The recent spate of strong winter storms across the eastern U.S. has wreaked havoc in many cities, most notably Atlanta where motorists were stranded in cars, children had to bed down in school gymnasiums, and state officials were raked over the coals.  The first statements from the aforementioned officials blamed the weather forecasters and the forecasters in turn blamed the officials.

This current conflict made an interesting backdrop for reading Isaac’s Storm by Erik Larson, a book I had on my TBR (To Be Read) pile for quite some time… like a decade.  It was well worth the wait.

Around the turn of the last century, the branch of the Signal Corps designated as a weather service was struggling to make itself seen as a respectable scientific institution. This was not easy.  Not only was the science itself in its infancy, but the some of the early official forecasters weren’t exactly the most reliable of characters.  Capt. Henry Howgate, the Chief Financial Manager of the Signal Corps, had been found guilty of embezzling nearly $250,000 at a time when, as Larson notes, “dinner at a nice restaurant cost thirty five cents.”  As if this weren’t bad enough, Howgate promptly escaped and went on the lam, dodging police, private detectives, and the Secret Service. Nor was this the only problem with personnel.  My personal favorite was the agent had all his daily readings made up ahead of time, leaving the telegraph office to send them out one by one while the agent went on his merry way. Another did his daily readings at the local pawnshop, where he had hocked all the weather instruments to pay his gambling debts.

And it really didn’t help when, in 1888, the service predicted fair weather for New York and instead the city got 21 inches of snow and Albany got over twice that amount. Drift were estimated to be 30 feet deep, and over 200 people died in New York City alone.

Those heading this new Weather Service were determined to prove that they could do more than just record basic readings, that they could actually predict the weather more accurately.  They would rely on science, not folklore.

The trouble was that meteorology was in its infancy.  Assumptions had been made based on incomplete data and on theories—some of which would prove to be fatally incorrect.

Most of the story centers around Isaac Cline and his family, including his pregnant wife, three young daughters, and younger brother and assistant, Joseph. Posted to Galveston in 1889, Isaac was a proud and upright young weather station manager, a graduate of Hiwassee College who also earned a medical degree.  Isaac took pride in his meticulous readings and weather observations. He took his study of weather very seriously, as did Joseph—though the brothers’ relationship was sometimes less collaborative and more competitive.

Galveston in 1900 had much to recommend it; it was a prosperous city in a beautiful setting with a harmonious and diverse population.  It boasts the largest port in the US. The city fathers also like to brag that the city is pretty much storm proof, due to its shallow bay and position on the Gulf, an opinion shared by Isaac.  In fact, he called the notion that a hurricane might do serious damage to the city “a crazy idea.”

They were about to find out just how wrong some of those assumptions were.

Erik Larson has a real gift as a storyteller.  The book is as gripping as any novel, with his vivid descriptions of people, places, and events.  The account of the storm is nail-biting in its intensity.  He provides detailed notes at the end, just in case someone wants to follow up on something in a chapter.  He uses diaries, interviews, newspapers, memoirs, and other primary sources to craft a truly compelling account of a time, a city, a man, and the deadliest storm ever to hit the United States.
Posted by BPL Ref at 1:56 PM