Profiles in Leadership: Historians on the Elusive Quality of Greatness, edited by Walter Isaacson 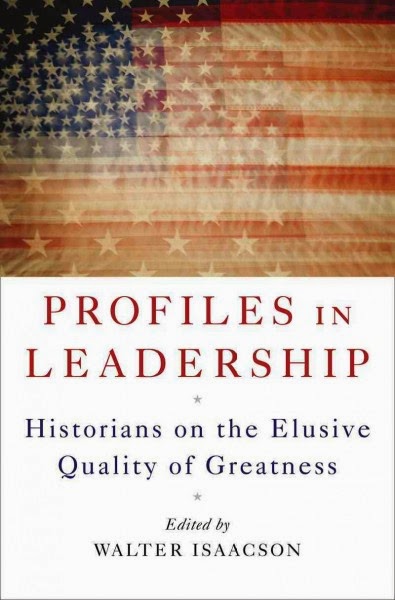 What is the essence of leadership?  What qualities enable some individuals to become leaders of all the rest of us?  Walter Isaacson, well known biographer of Albert Einstein, Benjamin Franklin, and Henry Kissinger offers some intriguing insights in his recent book, Profiles in Leadership: Historians on the Elusive Quality of Greatness.  In short, this book consists of thirteen essays by significant historians, highlighting individuals in our history who have been awarded the distinction of greatness.

Isaacson and his essayists suggest that the qualities that make for greatness are varied and elusive.  No simple formula can account for this distinction.  George Washington is included in this book as are more recent figures such as Franklin D. Roosevelt and Dwight Eisenhower.  So are others whose names will not be at all familiar to you.  Who has heard of John McGraw and why does Glenda Gilmore appear?  And that is a characteristic feature of this book –  a valuable one at that.  If only the pantheon of Washington, Jefferson, Lincoln – you can suggest others – made up this book, what would that tell you?  It is the introduction of other names, the stories of those whose careers were not in the spotlight of attention, that makes this book valuable, for it forces you to reconsider that essential question: what are the elusive qualities of greatness.

There are also some interesting comparisons of individuals facing similar circumstances or in different aspects of their careers.  One essay compares Herbert Hoover and Franklin D. Roosevelt in their efforts to fight the Great Depression.  In another essay David M. Kennedy asks the question: why was Eisenhower so successful as a military leader, but had much less success in his later role as president?  He suggests that certain basic inner qualities within the man made the difference.  As the sub-title suggests, those qualities are elusive.

The book is well written, for Isaacson has chosen authors of established literary skill.  And much of the pleasure in reading the book will be your introduction to individuals unknown or perhaps barely known to you.  How much do you know of Chief Joseph and his leadership of the Nez Percé Indians in the Rockies? And read Robert Dallek’s essay on “When Presidents Become Weak.” It will give you new insights into leadership in the White House.  In sum, it’s an engaging book that will leave you thinking – and that’s not a bad thing!
Posted by BPL Ref at 9:03 AM