The Men Who Lost America by Andrew Jackson O'Shaughnessy 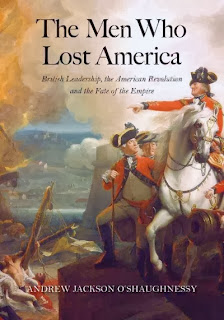 When we think of the American Revolution the mental images that come to mind are of the New England Minutemen confronting British regulars at Bunker Hill, the generalship of George Washington and the suffering his men endured during those cold winters at Valley Forge, and the determined march of the Overmountain Men who destroyed a Loyalist force at King’s Mountain and helped change the course of the war in the Southern states.

But there is another approach, one little known by most Americans, and that is a knowledge of the British side of the American Revolution.  And understanding that perspective sheds a whole new light on how the war was fought and provides clues as to the reasons for American victory.  That is the thrust of a newly published book, The Men Who Lost America: British Leadership, the American Revolution, and the Fate of the Empire.  Even if you think your know the war fairly well, you will find that the author, Andrew Jackson O’Shaughnessy, professor of history at the University of Virginia, has some valuable insights about the nature of the struggle.

For example, the British government never fully understood American resistance to Parliamentary taxation, for tax rates were actually much higher in Britain.  And when the British sent major armies to subdue the colonies, their generals thought in terms of seizing towns and centers of population.  At one time or another they captured and controlled Boston, New York, Philadelphia, Charleston, South Carolina, and Savannah in Georgia.  But they failed to grasp that the heart and soul of the rebellion centered in Washington’s valiant army.  If they could ever have entrapped the little American army and forced Washington to surrender, the war would have been over.  Washington actually lost most of the battles he fought, but his army always escaped capture and was ready to fight again another day.  And so the conflict continued year after year.

Finally the British people grew tired of a war that never seemed to produce any significant gains.  In1781 when Lord Cornwallis invaded Virginia, leaders in London knew that continuance of the war depended upon Cornwallis achieving a significant victory.  King George III was one of the most vigorous proponents of the war, for he considered it a personal affront  that the Americans preferred not to be ruled by him.  And so when Cornwallis surrendered at Yorktown in October, George could only cry out in his despair, “Oh God, it’s all over!”  It was probably the most perceptive analysis of the war he made during the entire six years of fighting!

Yes, you’ll find this a delightful read, full of many interesting stories, and you’ll be glad for the chance to witness the conflict from a new perspective when you stand behind the British lines!
Posted by BPL Ref at 10:35 AM