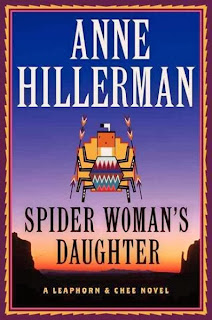 Officer Bernadette Manualito Chee is having breakfast with some other members of the Navajo police when she witnesses a dear friend being shot.  Joe Leaphorn, the legendary lieutenant, lies gravely wounded as the shooter speeds off.

Even though she is relieved of duty, Bernie is determined to fulfill the promise she made to Leaphorn that she would find the one who did this.  She begins by checking his current projects:  Leaphorn had continued to do some investigative work after his retirement as well as some consulting.  This leads her to a museum of Native American artifacts, where he was assisting with appraisals and provenance. The police are also checking through Leaphorn’s old cases to see if someone he arrested holds a grudge.  Then there’s the disappearance of Leaphorn’s girlfriend Louisa, which leads to questions of a domestic dispute.

Aside from the case, Bernie is dealing with family issues.  Her younger sister Darlene is charged with caring for their elderly mother, but Darlene is feeling trapped and rebellious.  She’s making some questionable choices and associating with people Bernie doesn’t approve of, leading to more friction between the sisters.

I was a long time fan of Tony Hillerman.  His books about the Navajo policemen Jim Chee and Joe Leaphorn introduced me to the fascinating culture and landscape of the Southwest while being extremely well- plotted mysteries.  When I read that his daughter Anne was going to continue her father’s work, I was both hopeful and apprehensive: I wanted more stories about Chee and Leaphorn-- but let’s face it, it’s often very difficult for one writer to duplicate another’s style effectively.

Anne Hillerman solved the problem neatly but using Bernadette as her main character, enabling her to create a fresh perspective and a new “voice.” The style is slightly more emotional and less detached than her father’s, but not jarringly so.  Where Tony would describe a scene and let the reader draw conclusions, Anne is more likely to explain.  She also tackles some issues of reservation life—alcoholism, health, the elderly—which her father treated more obliquely.  Anne uses Bernie’s relationships to good advantage, giving the readers a closer glimpse of Navajo family life but without letting the story lapse into soap opera.

The mystery itself is based partly on events from A Thief of Time, arguably one of her father’s best books, but you don’t need to have read it or any of the previous books to enjoy this one.  The book is well-plotted, but several reviewers said they figured out whodunit early on and found some of the attempts at misdirection to be handled a bit poorly.  I found the villain’s exposition to be more than a little unbelievable—think James Bond baddie explaining his plan in great detail as Bond faces Certain Death—but overall I found this to be a very readable, engaging book and I’ll certainly try her next one.  The writing itself is polished, nicely descriptive without bogging down in detail, and the characters are well done. Like her father, a sense of place is crucial to Anne’s story. Navajo art and artifacts play a pivotal role in the book, and Hillerman does a good job of describing not just the appearance of the items but the emotional connection they have for the Dineh.  She’s also not afraid to shake up the status quo. In short, this is a promising start to a new chapter in the lives of some beloved characters. Finally, I really liked seeing Jim and Bernie happily married, and enjoying  a true partnership.

Spider Woman’s Daughter is recommended for fans of traditional mysteries, especially those with a Southwest or Native American setting.
Posted by BPL Ref at 9:46 AM