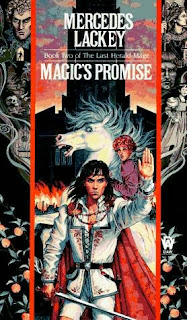 Magic’s Promise is the sequel to Magic’s Pawn, in which we were introduced to Vanyel. As the book opens, we find Vanyel, one of Valdemar’s few Herald-Mages, returning from war, with a weary body and depleted magic.   He needs rest and time to rebuild his stores of power so he heads home to visit his family.  He returns to the entirely different world of familial problems: a mother who smothered him, brothers who looked down on him, women who wanted to seduce him and trap him into marriage, a weaponsmaster who resents him, and a father who despises him.  These things he expected; but in addition he faces an unprecedented temptation.
He meets Medren, a young boy who reminds him so much of his own self at that age that he fears that the boy will meet the same fate as he himself once did at the hands of his father and the weaponsmaster.  Vanyel feels he must find a way to protect the child from these powerful men who want to train him to be warriors like themselves.  Soon, however, Vanyel discovers that Medren is also Gifted with the Bardic Gift Vanyel once coveted, which causes him to redouble his efforts to keep the men from breaking Medren’s lyre-playing fingers … or from breaking the boy’s spirit.
Needless to say, this keeps Vanyel from getting the rest he needs. Out with his Companion Yfandes,  Vanyel hears a cry of distress from far away, and they race to go to the rescue.  What they find is confusing at best and shocking at worst: a Herald and a small boy who had just been Chosen by a Companion.  And the Herald is beating the Trainee!  The cry they had heard was from the Trainee, a boy named Tashir, who is apparently Gifted in telekinetics.  It appears the child had just killed everyone in the house during a party, including his own entire family.  Vanyel couldn’t understand it.  If a Companion had Chosen Tashir, there was no way the child could be evil, and yet all evidence pointed to the deaths being Tashir’s doing.  The child was so traumatized that he had blocked out most memories of that evening.  What few memories the child could share proved to Vanyel that Tashir’s was a family with as many factions and politics as his own.  On top of that, Vanyel finds himself involved in a family feud that may turn into an all out war.
Not believing Tashir was responsible for all those deaths, or that at worst, he had done so accidentally as a result of not being able to control his Gift, Vanyel has to find a way to protect the boy while he investigates. If someone else is responsible, then Vanyel needs to bring them to justice.  Meanwhile, Vanyel finds himself accused of unsavory intentions which threaten to distract him from finding the truth.
Magic’s Promise started out slowly.  It seemed to me she took too many chapters explaining that Vanyel needed rest and was going home to visit his family even though he dreaded it.  But before it was over, the story was so exciting it was impossible to put down.  I recommend Magic’s Promise to any adult who loves fantasy, adventure, magic, and good vs. evil.
Posted by BPL Ref at 9:07 AM