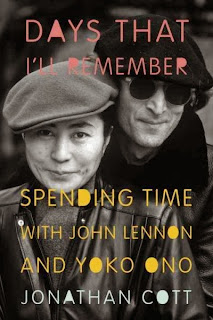 “There are places I’ll remember, all my life, though some have changed.  Some forever not for better, some have gone and some remain….” These are the words that keep going through my head while reading this book.  Fans will recognize “In My Life” by the Beatles from 1965.  It’s hard to believe that was almost 50 years ago.  Okay, that was a little before my time, but I still grew up with the sounds of the 60’s in the background.  Since that time, thousands of books have been published about the Beatles, individually and collectively.  What makes this book different?  Cott first interviewed John Lennon and Yoko Ono in 1968 in their London flat.  The author claims a friendship was born, and it was Cott who interviewed the couple on December 5, 1980, just three days before John Lennon was murdered.

Cott explains that he had never transcribed his taped interview of John and Yoko from 1980.  Suddenly, in 2010, he realized that it was coming up on the 30 year anniversary of John’s death.  Thinking that perhaps the tapes could be degraded to the point they might not play, Cott located the tapes and spent ten days transcribing them.

Cott talks about what he was doing in life, and then segues into his observations of John and Yoko, and by extension, the Beatles.  On January 30, 1969, he received a phone call from the Beatles’ press officer Derek Taylor alerting him to the fact that the Beatles were planning something.  Indeed, they were planning what would be their last public performance, on the rooftop of the Apple Corps building.  I can only imagine the thrill of the crowd as they craned their necks to see what in the world was happening.  Yes, this has been recounted by many observers, but I appreciated the retelling.

Cott writes about Yoko, both in relation to John and as an individual.  This book delves a little deeper into Yoko’s family background than many others published.  Present at the American bombing of Tokyo on March 9, 1945, Yoko and her mother and siblings had to move to a rural village, quite a difference from the privileged city upbringing of her younger years.  Continuing with her college years, Cott paints a life of a well-to-do daughter who was given the opportunity to dabble in art and music.  Continuing on, Cott discusses his many interactions with John and Yoko, culminating (for this book, at any rate) with an interview with Yoko in 2012.

If you are a Beatles/John Lennon/Yoko Ono fanatic, this book may not bring much new information to light, but may provide an interesting read.  I give it a “thumbs up” for yet another illuminating window into the lives of John and Yoko.
Posted by BPL Ref at 9:16 AM