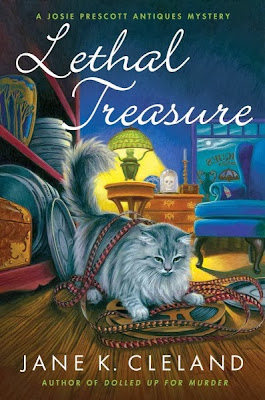 Antiques dealer Josie Prescott is attending an auction of storage units with new friend Henri, who has opened a decoration and design firm with his wife Leigh Ann.  Customers are given a quick look at a unit’s contents, but aren’t allowed to open any boxes or otherwise examine contents before they bid. Henri is in a rather contentious bidding war with another would be buyer, but emerges victorious while Josie picks up a couple of units.  The interesting part is examining the contents for value.  This time around, there’s a pile of costume jewelry, along with one piece that may not be imitation.  Henri has also come across some theatre posters, which are potentially valuable if Josie can identify the artist.

Then Josie gets a frantic call from Leigh Ann:  Henri has not come home. It turns out that Henri may never have left the auction site—and someone wants to cast suspicion on Josie.

Somehow I’m always surprised at how very good these books are. Each book imparts some fascinating tidbits of information about antiques and collectibles but it never feels forced; sometimes knowing about the antiques may provide some information about the crime, as well.  I’ve often found myself as intrigued about the antiques as I am about the murder.  I had no idea that some early theatres commissioned posters from local artists to promote the films, nor did I realize that in the case of jewelry, some artists’ drawings for pieces can be kept on file for decades. Yet the author never lets this aspect bog the story down, but keeps things moving.

Cleland is old school in her mysteries, skillfully planting clues so that an attentive reader does have a chance to figure it out.  Josie is an appealing character, friendly and knowledgeable without coming across as all-knowing.  Her involvement with crime is also done in a more organic way than in some mysteries.   I also appreciate the way that Cleland avoids so many cozy clichés.  Her heroine is a businesswoman with a good head on her shoulders, dealing in merchandise worth tens of thousands of dollars. She’s sensible, independent, but a good friend. She’s in a stable relationship with Ty Alverez, a Homeland Security officer. She’s also not foolhardy; you won’t see her slipping around in a diaphanous gown to investigate the screams in a basement. A scene that particularly delighted me was that when the police bring Josie in for questioning.  Even though the interrogator is a long time friend, Josie asks to speak to her lawyer.  Yes!  That’s exactly what one should do.  I know this because I read Nancy W.’s review of Behind Bars:  Surviving Prison.  (You can read it here—and it’s definitely worth the read!) As a long-time admirer of Rex Stout’s Nero Wolfe, I also love the little Wolfian tidbits she drops into the books.

As I said in an earlier review, the Josie Prescott series is Antiques Roadshow meets Agatha Christie—and I mean Christie specifically for the way clues tend to be delivered, buried somewhere in casual conversation.  In short, this is a well-written, entertaining classic mystery with solid characters, good plots and oh, yes, a cat.  However, the presence of Hank the Maine Coon did not influence this favorable review—at least, not much.
Posted by BPL Ref at 11:11 AM