The Witness by Nora Roberts 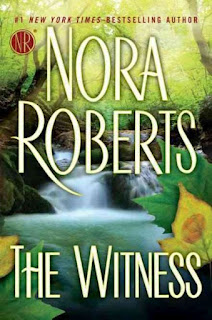 Reviewed by Doris
“Elizabeth Fitch’s short-lived teenage rebellion began with L’Oreal Pure Black, a pair of scissors, and a fake I. D. It ended in blood….”
From this first line of Roberts’ 200th published novel, you get hooked on the story of one of her most unusual main characters.
Elizabeth is the product of a carefully chosen artificial insemination by an emotionless, controlling mother. Every moment of her existence is monitored by parent who looks on her as more of a science experiment than a child until one night Elizabeth decides to make her own choices. Those choices place her in the middle of a Russian mob hit. She becomes a protected witness but betrayal sends her running for her life into the night. Twelve years later she has a new identity, a new home, a huge dog trained to protect, a gun strapped on her hip, and a new sheriff wondering just what she is hiding.
Still hunted by the Russians Elizabeth has developed sharply honed survival skills. Isolated by the need for total control to ensure her survival, she has minimal contact with people around her. When Sheriff Brooks Gleason begins to drop by to chat and snoop just a bit, she is unsure, frightened, attracted to his easy manner and charm. Still, as with everyone she meets, Elizabeth has to ask, “Is he the one who will betray me?”
This book has the usual Roberts’ signature points but expands on them to make The Witness the strongest standalone novels Roberts has done in several years. The plot is a top thriller caliber storyline. It builds tension and moves rapidly to keep you reading (500 pages read in one night because I wanted to know what happens with the crazy Russians). Most importantly, Elizabeth is different than Roberts’ usual heroine. She is socially awkward as brilliant people often are. The only emotions she has felt for years are fear and anxiety. When Sheriff Brooks Gleason keeps pestering her and prying into her business, she is blindsided by the feelings he generates inside her. She is also very strong-willed and brave and determined that her fate is her hands and no one else is responsible for it. While you can guess the ending well before the last page, you are touched by Elizabeth’s journey through the maze of emotions and deadly treachery around her.
Posted by BPL Ref at 9:00 AM