Making Piece: A Memoir of Love, Loss and Pie by Beth M. Howard 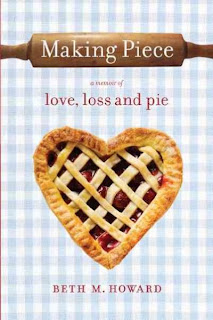 Reviewed by Jeanne
Beth Howard had always had a taste for pie, but she didn’t plan on making it her life’s work.  She also didn’t plan on falling in love with and marrying Marcus, a wonderful German man whose workaholic ways and many job transfers made for more time apart than together.  She didn’t plan on filing for divorce as the only way to save the relationship.
Most of all, she certainly didn’t plan on Marcus dying suddenly at age 43, with the divorce still pending.
Overwhelmed by grief and guilt, Beth tried to cope the only way she knew how: by making pies.  She calls pie the ultimate comfort food.   Pie can be sweet or savory, hot or cold, and it can be made of almost any edible ingredient. Pie had saved Beth once before when she’d quit a stressful job at a dot com and become an apprentice pie-maker at a Malibu eatery.  In fact, Beth owed her entire existence to a banana cream pie with which her future mother wooed her future father.
So pie it was.  A friend of Beth’s thought that she might do a reality TV show about pie and was pitching the idea to the Food Channel.  They decided to shoot some sample episodes that would have Beth traveling the country making pies and interviewing other pie makers. Marcus had bought an enormous RV to take camping, so Beth loaded it up and set out to spread some joy and perhaps to ease her own pain.
The result is this bittersweet memoir, the story of one woman’s attempt to overcome tragedy.  There’s a lot about pie, some thoughts on human nature, a good deal of self-analysis.  This isn’t a cookbook, though there are a few recipes included.  There are very clear directions on how to make a pie crust—a good pie crust, that is.  It’s not giving anything away to say that Beth ends up living in the iconic “American Gothic” house, the one immortalized in the Grant Woods painting.  As she says at the start of the book, it may be the only house in which the renter has to sign an agreement to be nice to tourists as part of the agreement.  While this is no Year of Magical Thinking, it is an interesting and sometimes moving memoir that covers a lot of American territory.
Posted by BPL Ref at 12:55 PM