As The Crow Flies: A Walt Longmire Mystery by Craig Johnson 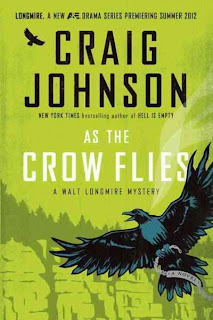 Reviewed by Doris
This eighth book in the Longmire series just may be my favorite. I have enjoyed the evolution of Sheriff Longmire as a character and Johnson as a writer since the first book The Cold Dish. Johnson is a master story-teller pulling you into the setting and characters with his sense of plot, character, and timing. To paraphrase an old theatre cliché, “You’ll laugh. You’ll cry. You’ll want to read it again.”
In two weeks Walt’s daughter Cady is getting married. Walt and his stoic Cheyenne buddy Henry Standing Bear are the de facto wedding planners and things are not going well.  Cady has her heart set on a particular location on the Cheyenne reservation for the wedding. All is fine until one contrary and scary librarian cancels the venue, and a new site must be found before Cady and mother-in-law-to-be Loretta Moretti arrive from Philadelphia. While checking out an alternative location Henry and Walt witness a young Cheyenne woman fall from the high cliffs to her death. Clutched in her arms is her six months old son.  Dog, Walt’s highly intelligent and loyal mutt, finds the baby alive. It is when Henry, Dog, and Walt rush the baby to the reservation hospital Walt finds himself under arrest by the new Tribal Police Chief Lolo Long.
Chief Long is a beautiful young woman but one with a massive chip on her shoulder.  Recently home from Iraq she has been appointed to a job in which she has no experience. The gut full of anger she is carrying and her inexperience are most likely going to get her killed unless someone takes her in hand and teaches her how to be a cop. True to his nature of not being able to walk away when someone needs his help, Walt reluctantly gets involved in the investigation.  Chief Long is just as reluctant to ask for Longmire’s help, but she knows she cannot do the job without it. Finally Long and Longmire settle down and we have an uneasy and often very funny relationship as old cop tries to teach young cop the ropes.
One strong element of the Longmire series has been Longmire’s acknowledgement of his aging and the limitations it places on his physical ability to do his job. He has made the shift to using his wisdom and knowledge of people, his understanding of how relationships work, and his powers of observation to give him the needed edge instead of just depending on being able to out run, out muscle, or  out gun the situation. Contrasting this with LoLo’s immediate and often over-the-top physical response provides much of the humor and some of the wisdom that comes as Walt tries to show Lolo how to control herself and a situation. I am looking forward to seeing much more of Lolo Long since it is apparent she and Sheriff Longmire have a great connection.
Usually I know who the killer is half way through a book, but Johnson got me on this one. It was not until close to the end that I saw what Walt had already figured out. Johnson’s plotting has always been well done, but this time he has stepped up his game and it plays well with the characters and setting creating a great read. I found the stories Walt tells Cady about his marriage to her mom Martha sweet and tender and very revealing. Of course after all is said and done, the wedding comes off beautifully, and the love between Walt and Cady is a beautiful offset to all the Longmire stories.
I particularly enjoyed not having to read about Victoria Moretti, Longmire’s undersheriff and love interest. She was in very little of the book which I consider a plus, and she already doesn’t like Lolo though she hasn’t even met her. I plan to be on Team Lolo. Many of the usual characters are in this book, and a few new ones are clearly defined and bring layers to the story. One segment of the book is an account of a peyote ceremony in which Walt participates and has a vision that reveals his inner nature and what drives him. It was fascinating and a pivotal moment.
A&E network is doing a Longmire TV series. The premiere was June 3 with more than four million viewers. Check it out on Sundays at 10 pm! The western setting and actor Robert Taylor appear to hold true to Johnson’s writing.
Note:  Doris had previously reviewed the series here:  American Icon
The series books in order are: