The Child Who by Simon Lelic 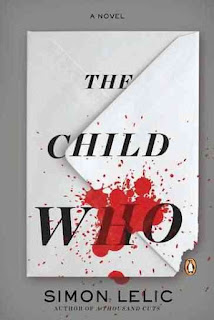 Reviewed by Jeanne
There is a prologue, but the real story of The Child Who by Simon Lelic starts with a celebration of an apparent piece of good luck.  Attorney Leo Curtice returns a routine call to the police station and finds himself the attorney appointed to represent a twelve year old boy who stands accused of brutally murdering an eleven year old girl.  It’s a high profile case that could make Leo’s career, and Leo does have ambitions; the problem is, he’s also idealistic. He doesn’t quite understand the rising anger directed not only at his client but at Leo himself.  Then the anonymous letters start arriving, and he begins to fear for not only his own safety, but that of his wife and daughter as well.
Lelic sets up several fascinating, complex moral dilemmas in his novel.  Leo is hardworking, earnest and hoping to finally prove himself.  Daniel Blake, the boy accused of murder, is sullen and angry and yet Leo feels sorry for the child whom so many want to toss to the wolves.  The child’s mother and stepfather seem more interested in how the case will affect them than they do in the outcome for Daniel.  Meanwhile, Leo’s wife is becoming increasingly frightened and upset as their daughter is bullied at school over her father’s involvement in the case.  In some ways, this book is a good companion for William Landay’s Defending Jacob, in which a district attorney finds his own son accused of murdering another student.  For me, Lelic’s book is more about the questions: can a child be responsible for murder? Who is to blame? How much should an individual risk in the name of some perceived higher principle? Lelic doesn’t provide any easy answers—or really, any answers.  Choices are made and prices are paid.  The characters are interesting but I didn’t find them engaging; it might have influenced readers more strongly in one direction or another and I don’t think that was the author’s intent.  He wants us to wonder. Leo, for example, asks many of the questions about justice but he also sees the case as a way to make a difference in the world.  Is he fighting for Daniel or for his own reputation?
The book does have some very deft twists and turns, though I’m not sure I’d dub it a thriller as some reviews did.  One big twist in particular I didn’t see coming, but in looking back there were hints.  If you like a mystery that gives you an opportunity to mull some big questions, this may be the book for you.
Posted by BPL Ref at 6:22 PM