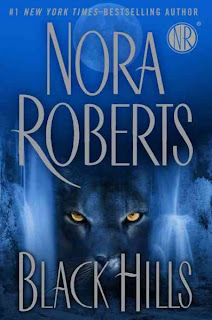 When you pick up a Nora Roberts book, you know what you are getting. There’s a smart, pretty, feisty heroine. The gorgeous hero will be someone who makes her really mad but for whom she feels this immediate “pull.” There will be snappy dialogue, some kind of mystery or adventure, and some scintillating sex that only occasionally gets raunchy. Black Hills continues that formula as only Nora Roberts can.

Remember that old cliché that you never get over your first love? Roberts takes that idea, plants it in the Black Hills of South Dakota on a horse ranch, and lets nature take it course. Coop is an eleven year old New Yorker who is angry that he has been shipped off to his grandparents’ ranch for the summer because of his parents’ messed up relationship. He is also pretty sure no one really loves him. Lil is a wide-open-spaces child of two loving parents who are neighbors and friends to Coop’s grandparents, and she knows an injured critter when she sees one. In one dinner and a game of baseball, these children become inseparable friends.

Through the years Coop returns to visit his grandparents whom he has come to love deeply and the girl who is his best friend. At eighteen Coop and Lil are passionately in love, but that path is more than rocky. A horrible discovery mars their last summer together, and Coop’s strained relationship with a domineering father causes him to break things off with Lil “for her own good.” Lil goes on to become a world-renown biologist and expert on big cats who establishes a nature preserve on her family land. Coop becomes a police officer and then sets up his own security company in the wake of his police partner’s death. Yet, for both of them, something fundamental is missing from their lives.

Twelve years after leaving Lil devastated, Coop comes back to the Hills. Drawn back into Lil’s world and the only place he has ever felt loved, Coop sets out to reclaim her heart. Stalling his efforts is someone tied to that horrible discovery made years ago who may be a serial killer and deadly threats on Lil’s life. Lil and Coop find it is easy to work together to find a murderer, but very hard to get past the old hurts and misunderstandings. Will love triumph in the end? Will our hero save the girl? Come on folks, this is a Nora Roberts book! Of course it all works out: it takes awhile to get there.

Critics haven’t particularly liked this Roberts romance. Some have felt the story lags and the characters are not up to her usual standards. The question has been raised that perhaps the Queen of Romance is turning out books too quickly to maintain her quality. My feeling is that I read Nora Roberts as an escape. If I want reality, I will watch CNN. While it may not be her best romance, I enjoyed the friendships which Roberts always does well and the animals. I like Lil better than Coop, but I can see in Coop all the reasons Lil would love him. As I said before, it is a Nora Roberts book. If you are a fan, you know what you are going to get, and you like the formula.
Posted by BPL Ref at 7:54 PM