Going to the Dogs

Dogs have a long and distinguished history of accompanying warriors, dating back to ancient times.  Egyptians, Romans, Greeks and many others went into battle with dogs at their sides.  Modern warfare may have become more mechanized but there’s still no complete replacement for a brave canine companion.   Soldier Dogs:  The Untold Story of America’s Canine Heroes by Maria Goodavage uses short chapters to cover how dogs are selected and trained, information about dogs’ senses and abilities, and of course, personal stories about soldiers and their dogs.   This is a good browsing book.
Where does a dog that stands nearly 63 inches high at the shoulder and who weighs over 245 pounds sleep?  If the dog in question is George, the current Guinness World Record holder for Largest Living Dog, then he sleeps in his own queen sized bed.  He used to sleep in a king sized bed with his owners but after many nights huddled on the edge of their bed, Dave and Christie Nasser decided George needed a bed of his own.  When Dave and Christie first saw George, he seemed to be the runt of a Great Dane litter: a bewildered bit of blue fur sitting beside twelve other pups.  They knew he’d be a big dog.  They just didn’t know HOW big. Life with a dog the size of a pony certainly has its challenges as well as its rewards as you’ll learn in this down-to-earth, easy-going memoir entitled Giant George:  Life with the World’s Biggest Dog  By the way, George has his own website www.giantgeorge.com with links to articles, photos, and updates on George’s latest adventures. by Dave Nasser.

The Nassers opted not to take George on the dog show circuit.  They thought it could become more of a full time job than a part time hobby.  Fortunately for those who like to curl up on the couch and watch the Westminster Kennel Club show, there are a lot of people who are willing to take the time and effort. You can read all about them in Show Dog:  The Charmed Life and Trying Times of a Near-Perfect Purebred by Josh Dean.  Dean follows the fortunes of Jack, a champion Australian Shepherd, in his quest to become Best in Show—or rather, in his owners’ quest.  The book is about the history and culture of professional dog breeders, owners and handlers, and it does make for fascinating reading.  As Craig Wilson calls it, “The literary answer to that laugh-out-loud movie, Best in Show.”  Some reviewers felt that Dean was too critical or was ridiculing dog people, but most enjoyed the book.  I thought it was funny, but not silly and not condescending. 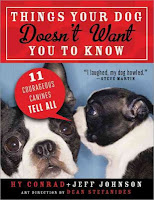 Things Your Dog Doesn’t Want You to Know: Eleven Courageous Canines Tell All by Jeff Johnson & Hy Conrad is a laugh-out-loud collection of essays from eleven different dogs, all with their own points of view.  Bandana the Border Collie is getting a little tired of having to run the household because his humans won’t even herd the children properly.  Orson the Bulldog confides that he knows when another dog gets a treat even if he doesn’t see it.  Axelrod the Lab doesn’t like his new collar that is like a funnel because now he bumps into things but he admits that it does make catching a ball easier.  Also, the new collar makes it really hard to scratch. Then there's Sarge the German Shepherd who is always trying to find out what his new job is with his new owner, and Tinkerbell the fashion accessory Chihuahua who has an encounter with the black and white striped cat under the house and ends up being doused with Bloody Marys-- but someone left out the vodka. There are some touching moments as well, the most quivering lip inducing being Sophie's comments at the end.


Sure, there have been other books along similar lines but Johnson and Conrad do an excellent job of capturing breed personalities and presenting things from a dog’s point of view. The book had to go away from the reference desk because it induced too much giggling, so I handed it off to a likely patron.  I’ll get to see it again, though because I’m buying a copy for some dog loving relatives.  They won’t mind getting a slightly used book.  The only criticism I’ll make is that there isn’t a Basset Hound among the eleven.  I’m sure Gatsby Fitzgerald Neal would have some choice words to add.