The Arctic Fury by Greer Macallister 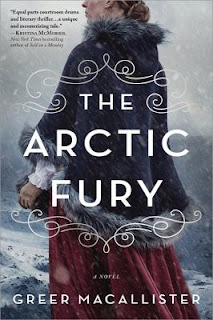 Virginia Reeve used to be a trail guide for families going west to California. But after one catastrophic outing, she gives up the West for something new. She agrees to lead a most unusual expedition: an all-women crew all headed to the Arctic in search of the lost Franklin expedition. The benefactor of this excursion is none other than Lady Jane Franklin, Sir John’s determined widow.

Though I expected this novel to be purely about the Arctic adventure, it actually switches back and forth between the adventure and the courtroom where Virginia is on trial for murder. As the story unfolds, we slowly learn the details: the victim, the accusations, and what really happened. I enjoyed this novel, and my time spent with the characters. There are thirteen women on this expedition, and it can be a little overwhelming trying to keep them all straight but, just like meeting new people in real life, readers eventually get to know them and either enjoy their company or don’t. I loved Virginia’s loyalty to her crew and to her own principles. And although I don’t know that I would call myself a fan of courtroom dramas, some of those scenes were particularly suspenseful and tense.

That being said, as much as I liked this book it was still missing something. I think it mostly boils down to me wanting more time in the Arctic with these women as well as more in depth interactions between characters. I also felt that some of the flashbacks were unnecessary. Virginia’s past is a mysterious secret, and I think the final revelation of what that past entailed would’ve had a bigger punch if we didn’t read about any of it during flashbacks. Just a few hints here and there would’ve built a nice foundation for the reveal.

Editing out some (or all) of the flashbacks and fleshing out the Arctic scenes would’ve probably elevated this book for me but I still liked it a lot and think it’s worth a read.

** I received an advanced copy of this book from Netgalley in exchange for an honest review. **