Devil and the Dark Water by Stuart Turton 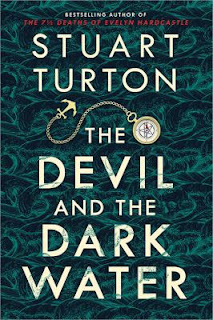 Samuel Pipps, the 1634 version of Sherlock Holmes, is being transported from Batavia to Amsterdam to stand trial for some unspecified crime, which will probably end in his execution.  His Watson, Arent Hayes, has served as bodyguard, scribe, and apprentice to Pipps.  Arent is a giant of a man, war-tested, and determined to make sure his friend and mentor arrives safely.  This will be no easy task.  Even as they approach the ship, menace lurks:  a ghastly figure, apparently a leper, yells a warning and then bursts into flames.

From this inauspicious beginning, things go downhill.  Jan Haan, the governor-general of Batavia, is determined to get to Amsterdam where he will become a member of the East India Company’s directors, a position with immense power and prestige. His wife, Sara, accompanies him as does his daughter and his mistress, and all of them both hate and fear him.

That is probably the least of his worries.

Word is spreading that a demon is aboard, a horrifying bringer of death and destruction who has left a trail of desolation in his wake.  He’s called Old Tom and he whispers to the crew and passengers, promising them their deepest desires if they will but do his bidding.

Is it really a demon? Or could it be manipulation by a human entity? Probably the only man who could solve this riddle is Pipps, locked up in a dark, tiny cell.  Arent tried to use the things he’s learned from Pipps but it may be too late.

The deaths have begun.

This is Turton’s second novel, after The 7 ½ Deaths of Evelyn Hardcastle, and it is just as twisty and dark as his first.  It’s difficult to review a book like this because as a reader I don’t want to give anything away.  This is a book for each person to discover, like peeling layers from an onion or wandering in a maze.

Turton has a real knack for bringing characters to life and here he has assembled a marvelous cast.  Sara is clever and strong willed, determined to protect her daughter and those she loves by any means possible.  Creesjie, Haan’s mistress and dear friend of Sara’s, is both beautiful and bright, and well knows that her value is in her beauty.  She was married twice, the second time to a witch-finder who may have met his end through this same demon. Pipps we know mainly through Arent’s accounts, but those make him a vivid character as well.

The book is very atmospheric.  One can almost hear the creak of the timbers and feel the sway of the deck.  It’s also deeply rooted in its time, when there was no guarantee that a ship would make port, being dependent on the skill of its captain and his ability find his way across the sea without instruments to find land; when women’s value lay more in their ability to make a marriage advantageous to the family and not to themselves; when the lower classes were subject only to the whims of the nobles; and when corporations such as the East India Company sought to rule the world by controlling commerce.  If this meant slaughtering recalcitrant natives, so be it.

Turton has an interesting afterword in which he says each book belongs to the reader and that all those interpretations are valid.  I liked it because I can see several different ways to view this book.  It’s a great book for discussion because of that, and we have the author’s blessing to read into it as we like.