Asleep: The Forgotten Epidemic that Remains One of Medicine’s Greatest Mysteries by Molly Caldwell Crosby 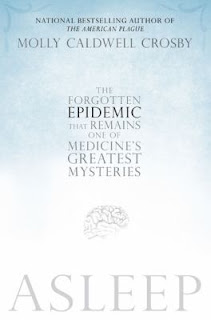 After finishing Get Well Soon by Jennifer Wright, I took a further detour into medical history – because I apparently want to be even more of a hypochondriac – and decided to check out some of the books mentioned in Wright’s bibliography.  I started with Asleep by Molly Caldwell Crosby, which dives into the medical mysteries surrounding encephalitis lethargica – or sleeping sickness.

Despite having the longest subtitle I’ve ever encountered in a book, Asleep was an interesting glimpse into encephalitis lethargica (EL) and the medical revolution that took place after World War I.  Called nonna or nona in Italy in the nineteenth century, EL has roots throughout Europe and America – remember Sleeping Beauty?  What about Rip Van Winkle? – but its causes remain largely unknown, even in the twenty-first century.

Crosby, whose grandmother suffered from the disease as a young girl, dives deep into the history of EL and explores the curious – and terrifying – course the disease took, starting in 1918, until it largely disappeared in 1927.  Initially diagnosed as a unique disease by Constantine von Economo in Vienna, EL went on to be studied by American medical doctors and neurologists, such as Frederick Tilney, Smith Ely Jelliffe, Josephine B. Neal, and Oliver Sacks (who penned Awakenings, a book on the treatment of EL sufferers).

Although I found EL terrifying – it can cause lethargy, sleepiness, catatonia, coma, insomnia, muscle spasms, muscle weakness, violent outbursts, personality changes, and worse – I was intrigued by the history of the disease and the time period.  Medical research and science were growing in leaps in bounds; neurology and psychiatry were branching apart for the first time; New York City was building and spreading into a sprawling metropolis.

Truthfully, I found it fascinating.

One thing I will note about the book:  Cosby is a journalist, first and foremost.  She writes very well and she managed to keep me hooked for much of the book, but she does dabble a bit in sensationalism and she doesn’t quite have a doctor’s critical eye.

Moreover, she does tend to draw off into a tangent to explain the history of the various individuals involved.  Although Asleep provides a great deal of research on encephalitis lethargica, it also dabbles quite heavily in history and takes more than a few narrative liberties.

Overall, I enjoyed reading Asleep.  I wouldn’t recommend it for the squeamish reader – there’s a bit about self-harm that turned my stomach – or the dedicated disease specialist, but, if you’re looking for a cursory history on a rarely mentioned subject, it might just be your cup of tea.