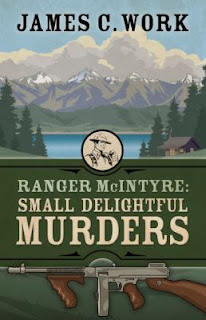 Rocky Mountain National Park Ranger Tim McIntyre usually enjoys his job, especially when he can slip off for a little fly fishing.  The park has only been open for eight years, and there are still problems to be ironed out, such as who has jurisdiction over investigations at a local resort known as Small Delights.  It’s privately owned, but that doesn’t stop the owners from calling on the park rangers for a wide variety of help.  This time, they’re reporting accidents which they insist are not accidents, but deliberate attempts to sabotage their business.  Trouble is, these booby traps—if that is what they are—are so inept that it’s hard to take them seriously.

But someone IS taking them seriously:  Polly, the niece of the lodge’s owner, is conducting a thorough, Sherlock Holmes-style investigation.  She’s also rather taken with the handsome ranger, much to his discomfort.  And he has to admit, she may have a point.  It does seem that someone wants to encourage the owners to sell out.  Is it the owner of a competing lodge?  Or does it have more to do with the Tommy-gun totin’ city men who are rumored to want to open a speakeasy here in the mountains?   Tim may have to call on his FBI girlfriend Vi—she of the fast cars and a machine gun of her own—for some aid, but he won’t mind that at all.

This is the second in the Ranger McIntrye series, set in 1923.  I enjoyed it as much as I did the first one, though action fans may find it a slog.  I get a kick out of Tim’s slow, methodical approach as well as the dry humor.  The setting is a plus for me as well.  It’s a throw-back to that mythic gentler time when everything was simple.  Tim is honorable, honest, and doesn’t jump to conclusions.  I also enjoyed learning a little about the early history of the park. Need I add that I quite enjoyed Ken Burns’ PBS documentary on the history of the national parks?

If I had to nitpick, I would say was a little disappointed that Polly didn’t really get her due.  She’s not physically attractive, being chubby and rather plain, but she is smart and I didn’t think it would have hurt a bit for her to have been appreciated a little more.

Otherwise, this was a fine outing (no forest pun intended) for those who like their heroes to be more Andy Griffith than Jack Reacher.