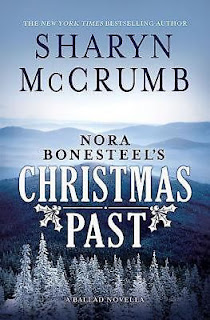 Sharyn McCrumb is probably one of the best known Appalachian writers working today due to the popularity of her Ballad series.  In this novella, she follows two storylines with characters from that series.  One features Sheriff Spencer Arrowood as he and his deputy set out on Christmas Eve with a warrant to arrest a man who lives in one of the many hollows in the area. This can be a difficult task at the best of times; doing it at a holiday makes it worse.  The second story is told from the point of view of Nora Bonesteel, a strong Appalachian woman with a reputation for “having the Sight.”  Her new neighbors who have moved to the area from Florida are wondering if the house they have bought is haunted and hope Nora will be able to tell them.

McCrumb does her usual wonderful job of evoking the Northereast Tennessee setting, giving readers sympathetic insight into the people and the history of the area.  There is pathos, humor, and an exploration of the rich Appalachian culture.  While those who have read McCrumb’s earlier books will particularly enjoy these visits with characters they know and love, you don’t have to have read any of the previous books to enjoy this one.  And, of course, you don’t have to wait until Christmas to read and appreciate it, though if you are looking for something to help get you in the seasonal spirit, this would be a good choice.

While both stories are good, I think that the Arrowood story would have been been better served by being done as a standalone.  It seems overshadowed by Nora’s tale, which—to my mind—would have been better if some of the characters had been more fully developed.  At the end especially I would have liked to have had a better sense of one character but others could have stood a bit more depth.  The story seems largely a vehicle for Nora to describe and explain some Appalachian customs, which is fine though I have a quibble or two there as well.  (Mostly there seems to be the assumption that our ancestors placed the same value on handmade versus mass produced items that we do.) More than once she stops thinking about the “Good Old Days” to say she was just “woolgathering.” I also think McCrumb stacked the proverbial deck by having the neighbors’ ornaments be Florida-centric (flamingos, beach things) rather than, say, Hallmark; more chances that the audience would shudder with distaste.

These minor quibbles aside, this slim book is a soothing dip into the past, which is something most need in these tense, perilous pandemic days. Times of “used to be,” indeed.