The Lost Are the Last to Die By Larry D. Sweazy

Guest reviewer Kevin Tipple is back with his take on this Larry Sweazy novel.  Check out his blog Kevin's Corner for more book reviews and book news, as well as links to topics of interest. 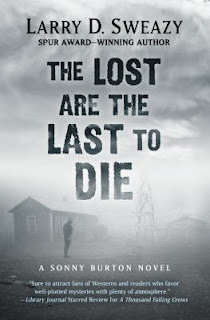 Sometimes a short story takes on a life of its own and becomes a full sized novel. Such is the case with The Lost Are The Last To Die: A Sonny Burton Novel. This read is a sequel to the very good, A Thousand Falling Crows.

It is October 1934 as this novel begins and Sunny Burton is no longer a Texas Ranger. Drought and the Depression have Texas in their two handed grip and men and the land are being crushed alike. Sonny Burton, thanks to the gunshot that ultimately took his right arm, will never be able to do a two handed grip again. His new prosthesis allows him to work the stick on his old model A Ford pickup truck and that makes driving a little easier than it was for a while there though he prefers to stay close to home.

That isn’t to be.

Collingsworth County Sheriff Layton Jones, known to all the locals as “Jonesy” brings word that Billy Bunson has escaped from Huntsville. When Burton was working for the Texas Rangers, he had several encounters with Bunson over the years. The first time was back when Billy was a small child. The last one got the adult Billy put away in Huntsville. Not only is he out, but he took the warden’s pregnant wife with him as a hostage when he left the legendary Texas prison.

Billy took her because the police grabbed his girlfriend. Donna Del Rey was helping in the escape and now is sitting in the county jail for her efforts. He wants to make a trade-- the warden’s wife for his girlfriend. To make sure he got his point across, he sent a piece of one finger. Everyone understands that if he does not get what he wants, he will keep taking pieces off of her until she is dead as is the baby. The Rangers want Sonny to find him. Billy knows that the Texas Rangers would get Sonny to help as nobody knows Billy better than Sonny. Sonny coming to Hunstville to lead the search would be expected and another piece of Billy’s plan.

Sonny does not have a choice and he knows it. He is going to have to go to Huntsville and find out all he can so that he can stop Billy if at all possible. A man who was passing his days waiting for the end is given a reason to do what he does best. Even if he does not want to admit it to himself that being back on the chase and needed makes him feel alive in ways he has not felt in a very long time.

What follows is a highly atmospheric mystery with a lot going on. Author Larry D. Sweazy uses a current storyline in 1934 as well as numerous flashbacks across various other storylines primarily to weave a complicated tale in terms of Billy and Sonny’s relationship. Those various storylines and flashbacks also serve to illustrate the complicated relationship Sonny had with everyone including his late wife, Martha, his son, Jesse, and the Texas Rangers, and others. More than once these storylines also touch on Billy and illustrate his childhood years and more and how, in some ways, his destiny was always pre-ordained as was the destiny of Sonny to this point. Multiple storylines are at work through the book as is the overarching idea of a sort of new beginning for Sonny who has suffered so much over the years. There is a lot going on in this very complicated read and far more than what is described here in this review.

The Lost Are The Last To Die: A Sonny Burton Novel is one of those rare reads in fiction that make you think long after the book is closed. I suspect author Larry. D. Sweazy and this book will be up for a slew of awards next year. No doubt he will collect more than one for this intense and very good read.

Lesa Holstine very graciously sent me the ARC she had of this for my reading pleasure after she completed her review. You can, and should, read that review here.