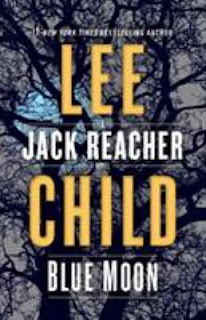 Blue Moon by Lee Child is the latest in the Jack Reacher series. I love Jack Reacher and wait anxiously for each new installment. After reading the latest, I may be done with Reacher forever. If you’re a fan, you probably know why I love Reacher. He doesn’t have a home or a cell phone. He travels from city to city, state to state, by bus or hitchhiking, with the clothes on his back and a toothbrush in his pocket. He lays his clothes under the mattress at whatever hotel he is staying at to remove the wrinkles. When they wear out, he buys a new outfit. Since he’s retired military police, he does have a debit card that he uses to pay his expenses, mostly a place to stay and gallons of coffee. Rarely does he stay in one city more than a week. Always, he meets people who need his expertise and he helps them because that is the kind of person he is. With his huge size, military training, and high intelligence, he is definitely the person you want in your corner.
This book starts out much the same: he’s on a bus, he sees a young punk planning to rob an older man and Reacher follows and intervenes. After that situation is dealt with in true Reacher fashion, he helps the older gentleman home and he intrinsically becomes involved in the old man’s problems. Aaron Shevik and his wife are in debt to loan sharks because of the cost of very expensive experimental cancer treatments for their daughter.  Unfortunately, the loan sharks are part of a very dangerous and deeply entrenched network with rival factions running the town so there is no relief in sight. Of course, Reacher enlists a love interest, and her friends, as they take on the whole underground network that keeps the town in servitude.
Typical Reacher, except it’s not. Very little mention is made of his nomadic existence and character development is nonexistent. Reacher has always done whatever it took to champion the underdog, even if murder was the only answer. He always gave them a running start, but was always victorious. This Reacher would more aptly be named Terminator. The body count in this book was too high for me to even estimate the number. It feels more like a movie shoot ‘em up screen play, than a traditional Reacher adventure. The fact that Hollywood took over the series and started a franchise (Don’t EVEN get me started on Tom Cruise playing the mountainous main character!) has ruined this wonderful series.  Reacher never killed unless he had to do so, he maimed and disabled, but never took a life unless it was necessary for the greater good. This Reacher killed almost everyone who got in his way and even killed in retaliation, rather than necessity. And that is why I will probably not read the next installment in a series I previously loved. However, if you enjoy action novels and are not as familiar with Reacher as I am, you would probably enjoy the book. For Reacher fans, I’m afraid this offering will be a disappointment.
Posted by BPL Ref at 10:06 AM