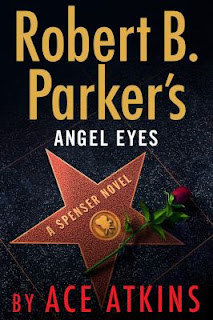 Guest reviewer Kevin Tipple is back with his take on this Spenser novel which continues the characters created by Robert B. Parker.  Check out his blog Kevin's Corner for more book reviews and book news, as well as links to topics of interest.

Robert B. Parker’s Angel Eyes: A Spenser Novel by Ace Atkins takes readers to sunny California where things are decidedly not sunny in so many ways. Not only is the weather often cold and rainy, the trail has gone very cold. 24 years ago old Gabrielle Leggett is a part time actress and full time social media influencer. “Gabby” is very much missing and her mom wants her found and back in contact with her family in Boston.

Mom hired Spenser to come to Los Angeles and find her daughter. Spenser is trying to do so and has sought help from his friend, Zebulon SixKill, who these days is also a private investigator thanks to the efforts of Spenser and Hawk, among others and his own hard work. Sixkill has cultivated his own network of contacts in the few years since he came out west and those contacts are going to be needed if Spenser is going to be at all successful.

It is easy enough to see her apartment and meet with Eric Collinson who used to be her boyfriend and then moved on to be her agent. It is also relatively easy to find her acting teacher and her classmates from the acting class she was taking before she vanished. What isn’t easy is to actually find her with so many folks being massively unhelpful as they claim she was the best and claim to know nothing. Then there are those who are hostile to finding her such as the creepy movie producer, members of the Armenian Mob, and a woman’s empowerment group that maybe is nothing more than a pyramid scheme wrapped up in a cult. They know things and when Spenser and Sixkill push a bit, the bullets start flying their way with much more promised. Good thing Spenser and SixKill can cash in some favors.

Robert B. Parker’s Angel Eyes: A Spenser Novel is an entertaining read. Unlike the Jesse Stone series that continued under Reed Farrell Coleman and had Jesse evolving as he grew older, this Spenser is the classic Spenser unchanged. He still cooks in detail all manner of dishes, flirts with Susan Sliverman, turns down the advances of beautiful and willing women, and still manages to survive wicked gun battles, all while doing the frequent sarcastic quip and taking the occasional long run to think. This Spenser has not changed a bit.

An entertaining read that never pushes any boundaries, Robert B. Parker’s Angel Eyes: A Spenser Novel is a fun light weight diversion that entertains and moves along at a fairly brisk pace. It is also a read that those new to the series can easily enjoy as there are very few references to the past. Those references that do popup are small references that are typical of the series and therefore do not impact reading enjoyment of the other books.

My reading copy came from the Prairie Creek Branch of the Dallas Public Library System.