Cleaning the Gold: A Jack Reacher and Will Trent Short Story by Karin Slaughter and Lee Child 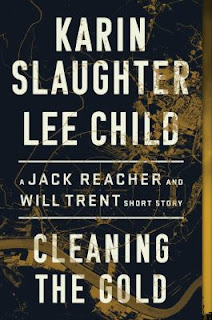 As I may have mentioned once or twice, I do enjoy Karin Slaughter’s series based around Georgia Bureau of Investigation agent Will Trent and medical examiner Sara Linton. I can just imagine the tall buildings of the Atlanta skyline and the dusty red dirt of a Georgia small town when Will and Sara fall into yet another case. (At least their adventures are related to their jobs, as opposed to the small town cupcake bakery/knitting shop/antique store proprietors who seem to have dead bodies turning up every time they open the door. Sorry-not-sorry, cozy authors.)

Jack Reacher is a tough ex-military cop who achieves his goals by any means possible. I have to admit that I’ve never read any Lee Child, although I will have to give him a try one of these days. As soon as my to-be-read pile is done, I promise.

In Cleaning the Gold, Slaughter and Child come together to explore what might happen if their protagonists, Will Trent and Jack Reacher, met each other. The men manage to finagle their way into Fort Knox, both with individual motives. Reacher has his eye on a potential governmental conspiracy, and Trent has his eye on Reacher. Twenty-two years ago in a small Georgia town, a large blond man killed a sheriff’s deputy right in the public library. Could Reacher have been that man?

The United States Treasury governing acts require that the Fort Knox vaults be inspected annually, but every ten years a more extensive measurement and accounting is undertaken. Those gold bars are heavy, and Trent and Reacher are hired for their muscles. But with that much gold, greed and dishonesty rear their ugly heads.

While a very short story at seventy-nine pages, I found this to be a quick and enjoyable read. This may be enough to move Lee Child upwards in my reading queue. Slaughter’s new novel The Last Widow (recently reviewed here) is previewed as well, taking up at least a third of the slim volume. Can one story have more than one hero? If this has interested you at all, pick it up and see how these two big guys interact.
Posted by BPL Ref at 8:58 AM