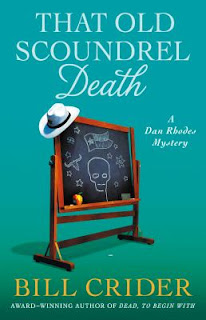 When Sheriff Dan Rhodes sees two cars pulled off at the side of a dirt road, his assumption is that a driver was in trouble and some Good Samaritan stopped to help.  He soon learns his error when he stops to check on them and finds himself facing a man with a gun.  True, he isn’t much of a man—scrawny and none too bright—and it isn’t much of a gun, but it is pointed at him and he’s pretty sure the guy is high. Or as Dan puts it, “Meth, breakfast of champions.”

As it turns out, the gunman is trying to teach highway etiquette to the fellow who (according to him) cut him off.  It doesn’t take Dan long to subdue ol’ Kenny and earn the gratitude of Cal Stinson who had just been out to look at the old schoolhouse his grandmother had attended back in the day.

The next day, Cal Stinson is on Dan’s radar again but not for traffic violations.  He’s been found dead at the schoolhouse.

And his name wasn’t Cal Stinson.

This was my first Dan Rhodes mystery and, honestly, I didn’t know what to expect. Several reviewers whose opinions I respect had said good things about the books but somehow I just never picked one up until now.  I’m glad I gave into the impulse when this new book came across the desk.

First of all, it’s a good mystery.

Secondly, it’s very funny but it’s not slapstick humor.  Well, except maybe from C.P. “Seepy” Benton who fancies himself a private detective and Dan’s right hand man, but Dan pretty much keeps Seepy in line. Time and again, there were lines I’d read over two or three times, just enjoying the humor and passing references to books and films that evoke fond memories.

Thirdly, Dan Rhodes is a great character.  Laid back and calm, I could see actor Sam Elliott in the role.  Dan is a long time sheriff who loves his wife Ivy even though she had decided he should eat healthy so now meals seem to involve kale which always tastes like kale no matter how Ivy tries to disguise it.  Ivy herself is a wonderful character, a good match to Dan.  She’s as quick witted as he is and as down to earth.  They share a mutual respect as well as love.

Finally, Crider does an excellent job of evoking place.  It’s not just the heat and dust of Texas, but the ramshackle homes of the down and out or the dark wood paneled dens of the movers and shakers.

My only regret is that it took me this long to meet Dan.  I am definitely going to pay another visit some time soon.

And if this book sounds familiar, it's because Kevin Tipple reviewed it for us earlier here. In fact, I think it was this review that spurred me (pun intended) into reading it and I liked it so much that I wanted to write my own review.
Posted by BPL Ref at 9:54 AM