Inheritance: A Memoir of Genealogy, Paternity, and Love by Dani Shapiro 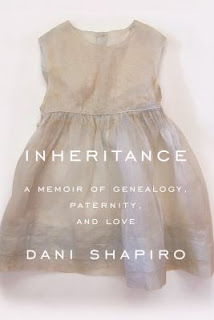 Genealogy was the first word which caught my eye on the cover of this book.  The background picture is unassuming, a short, aged, ivory dress, such as one which might be worn to a baptism or a bat mitzvah.  Opening the cover, I read that the author, Dani Shapiro, had a big surprise when she decided to have her DNA tested as part of an ancestry kit.  Her unusual blonde hair, blue eyes, and fair complexion had never quite fit in with her dark haired Jewish family, and suddenly those features seemed a lot more significant.  Only about half of her DNA pointed to being Eastern European Ashkenazi, (Jewish,) so what about the other half?

Shapiro made this personally earth-shattering discovery in 2016, in the modern era when DNA testing is rather commonplace, and where the internet is a treasure trove of information if you just know where to look.  Very quickly, Shapiro was able to figure out the bare bones of how she came to be, and even found a YouTube video of the man she suspected was her biological father.  Suddenly, her life was turned upside down.  If the father she had always known was not related to her genetically, how had this come about?

Within a surprisingly short period of time, Shapiro was able to reach out to a man who she had so much in common with and yet had never known.  Treading lightly, she began to explore the possibilities of forging a connection with the man who played a tiny part in her creation, while still holding tight to the family heritage which had encompassed her very being from the moment of her birth.

Shapiro’s parents had both passed away.  Searching for clues in remembered conversations was one way that she tried to understand what her parents had gone through five decades earlier.  A box of papers in the basement provided some clues and also sparked memories of the uneasy relationship she had with her mother over the years.  Seeking peace and answers, Shapiro continued talking to family members and friends.  The discovery brought her closer to some, but created distance with others.

Shapiro has written several other memoirs and works of fiction, often focusing on the intimacy of family relationships.  This memoir explores family identity, larger ethnic distinctiveness, and the human capacity for love.
Posted by BPL Ref at 12:24 PM