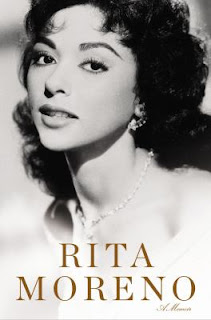 Rita Moreno may be 87-years-old but she shows no signs of slowing down. She made her way to Broadway as a very young teen and has been acting on both large and small screens since 1950. In those decades she has been everything from the generic “ethnic” character to the dancing Cuban grandmother on Netflix’s recent adaptation of “One Day at a Time.” As she states in this volume, “…retirement is just not in my DNA.”

Leaving Puerto Rico with her mother at age five, Rosita Dolores Alverio found New York City cold and colorless. She didn’t understand why they had left her little brother Francisco behind, why they were living in a five floor walk-up with Aunt Titi and many other cousins, or why the other children on the streets hurled racist comments at her. This was in 1936 in the midst of the Great Depression, and yet Rita’s mother made the choice to take a dangerous voyage in terrible conditions in hopes of a different life for herself and her daughter.

Crossing paths with such celebrities as Clark Gable, Gene Kelly, Ann Miller, and Howard Hughes, Rita soon caught the attention of another big name: Marlon Brando. The two embarked upon a tumultuous love affair. Rita also dated Elvis Presley, although noting that he was much more innocent and childlike than his public persona would indicate. This memoir reveals personal details of Rita’s relationships with a number of famous men, although it must be noted that in 2013 when this was published, she had already outlived most or all of those about whom intimacies were revealed.

This memoir is the true story of a woman trying to figure out who she is, of the journey which has taken her from a happy little girl to an accomplished and happy woman with many stops and starts along her journey. I didn’t know much about Rita before reading her own words, but I’m glad that I did. This memoir draws a portrait of an energetic girl and woman who continues to live a very interesting life. Her unique perspective as a woman of color over the course of a huge chunk of American cinematic history is fascinating.
Posted by BPL Ref at 9:16 AM